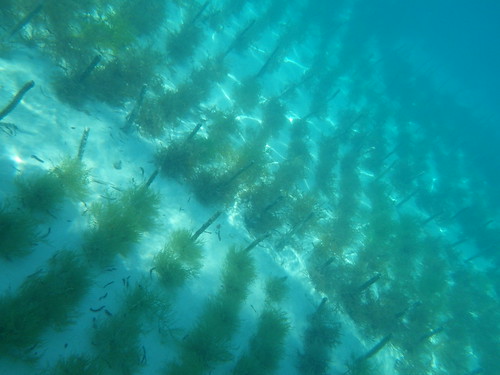 As algal blooms close beaches and disrupt ecosystems, algae has been a growing environmental concern for quite some time. It’s viewed by many as a scourge and a problem we need to eradicate. But one group of researchers does not agree.

They said, “In our research, we turn the argument on its head and see algae as a resource. We collect excess algae along the coasts and cultivate new algae out at sea.” Why would they do this?Fredrik Grondahl, head of the Seafarm Project at the KTH Royal Institute of Technology in Sweden, hopes to use algae as a cheap and plentiful source of food, medicine, plastic, and biofuel.

Humans use almost 40 percent of the production derived from land-based ecosystems but only about 1 percent of what the sea can produce.

The excessive fertilization of our oceans due to human activity—called eutrophication—ends up creating too much algae and, to make things worse, what we do produce from the sea is mostly exploitive.

Some fishing practices, including trawling, ravage the oceans. Trawling kills thousands of living things that are never used in order to get the fish that trawlers want. Utilizing the potential of algae could change all of that. Its utility is incredible and almost completely overlooked in most Western cultures.Algae contains vitamins, amino acids, and minerals.

It can be eaten plain or used to produce spices and oils. It can also replace more environmentally damaging forms of animal feed. Brown algae can produce three times the amount of sugar found in sugar beets. Grondahl’s Seafarm project grows algae on barrels and then harvests them on land, where they are further processed through biorefining processes.

His farm, and other projects like it, have immense potential to change the world.Other nations have been using algae for quite some time. Many parts of Asia, particularly Japan, have been using it for centuries. Ireland, a nation with a long tradition of using seaweed, has developed extensive algae cultivation projects since 2010. In 2011, Norway began similar projects. So, maybe the sea farms envisioned by science fiction writers and futurists are finally on their way.