How Dangerous can be an Asteroid?

An asteroid striking our planet — it’s the stuff of science fiction. Many movies and books have portrayed this possibility (“Deep Impact,” “Armageddon,” “Lucifer’s Hammer,” and so on).

An asteroid impact is also the stuff of science fact. There are obvious craters on Earth (and the moon) that show us a long history of large objects hitting the planet.

The most famous asteroid ever is the one that hit Earth 65 million years ago. It’s thought that this asteroid threw so much moisture and dust in to the atmosphere that it cut off sunlight, lowering temperatures worldwide and causing the extinction of the dinosaurs. So, what if an asteroid were to hit Earth today?

Any asteroid falling from the sky would have a tremendous amount of energy. Here’s a typical example. In 2028, the asteroid 1997XF11 will come extremely close to Earth but will miss the planet. If something were to change and it did hit Earth, what you would have is a mile-wide asteroid striking the planet’s surface at about 30,000 mph.

An asteroid that big traveling at that speed has the energy roughly equal to a 1 million megaton bomb. It’s very likely that an asteroid like this would wipe out most of the life on the planet.

It’s difficult to imagine 1 million megatons, so let’s try some smaller sizes. Let’s say that an asteroid the size of a house crashed on Earth at 30,000 mph. It would have an amount of energy roughly equal to the bomb that fell on Hiroshima — perhaps 20 kilotons

An asteroid like this would flatten reinforced concrete buildings up to half a mile from ground zero, and flatten wooden structures perhaps a mile and a half from ground zero. It would, in other words, do extensive damage to any city.

If the asteroid is as big as a 20-story building (200 feet on a side), it has an amount of energy equal to the largest nuclear bombs made today — on the order of 25 to 50 megatons. An asteroid like this would flatten reinforced concrete buildings five miles from ground zero. It would completely destroy most major cities in the United States. 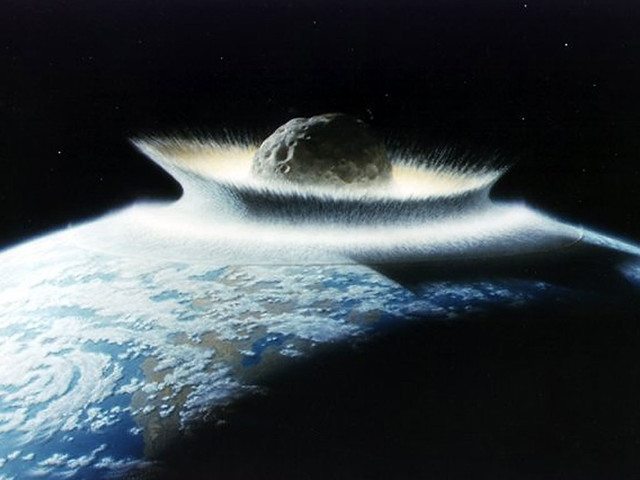 By the time you get up to a mile-wide asteroid, you are working in the 1 million megaton range. This asteroid has the energy that’s 10 million times greater than the bomb that fell on Hiroshima. It’s able to flatten everything for 100 to 200 miles out from ground zero.

In other words, if a mile-wide asteroid were to directly hit New York City, the force of the impact probably would completely flatten every single thing from Washington D.C. to Boston, and would cause extensive damage perhaps 1,000 miles out — that’s as far away as Chicago.

The amount of dust and debris thrown up into the atmosphere would block out the sun and cause most living things on the planet to perish. If an asteroid that big were to land in the ocean, it would cause massive tidal waves hundreds of feet high that would completely scrub the coastlines in the vicinity.

In other words, if an asteroid strikes Earth, it will be a really, really bad day no matter how big it is. If the asteroid is a mile in diameter, it’s likely to wipe out life on the planet. Let’s hope that doesn’t happen anytime soon!