How Black Holes Continue To Astound Us

A black hole is a large amount of matter squeezed into a tiny area with an enormous gravitational pull for its size. Many black holes form from dying giant stars that collapse in on themselves. But even as black holes, they continue to orbit and exert the same gravitational pull on objects around them. Not all scientists believe in black holes. But for those who do, the surprises just keep coming.

5
Our Early Ancestors May Have Seen The Milky Way’s Black Hole
Around two million years ago, the supermassive black hole at the center of our galaxy burst into life with a radiant glow. At that time, man was just beginning to walk upright. Our ancestors would have seen a moon-sized light in the southern sky that looked like a bright fuzz ball or smudge.

Our black hole, Sagittarius A*, is quiet now. But back then, it was believed to be an active galactic nucleus (AGN), the energy-producing compact center of a galaxy that greatly outshines the rest of it.

A feeding black hole may be the source of an AGN as its gravitational pull attracts matter, forming a disk that heats up and glows. If the disk pulls in large amounts of matter, two bright jets of high-energy particles will be cast off from the black hole perpendicular to its spin. 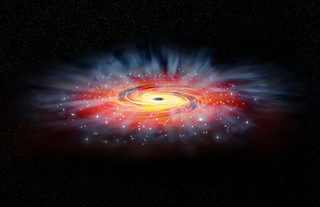 Astronomers devised this AGN theory in 2010 after spotting two Fermi bubbles stretching 25,000 light-years above and below our galaxy. The scientists believe that AGN jets could have produced those bubbles between one and three million years ago.

The black hole light show would have lasted a few thousand years for our ancestors. According to anthropologist Chris Stringer, “It was the beginning of the genus Homo. Stone toolmaking had already begun, but the brain was only beginning to enlarge.” If Sagittarius A* goes AGN again, we may be treated to our own amazing light show in the night sky.