A Neptune-size planet beyond the solar system has telltale traces of water vapor in its atmosphere, making it the smallest exoplanet known to have the wet stuff yet, scientists say.

Several massive Jupiter-size giants have had the components of their atmosphere examined, but until now, the atmospheres of smaller planets have proved more elusive.

This planet, the size of Neptune, is located 124 light-years from Earth, called HAT-P-11b, the exoplanet — as alien planets are called — is about four times the size of Earth. It was first discovered in the constellation Cyngus in January of 2009 using astronomy’s most effective detection tool, a technique called the transit method in which exoplanets are seen and studied primarily through light they absorb as they pass in front of their local star.

Like a planetary silhouette, an exoplanet affects the light output of the star behind it as it transits, letting astronomers deduce the planet’s mass and size even though it’s impossible to view it with a telescope.

Now, that very same transmit method has let astronomers peak inside the air one might breathe if they stepped foot on HAT-P-11b, yielding the discovery of water vapor on the smallest planet yet and unlocking a deeper understanding of the formation of planets and the possibility of life outside the solar system. 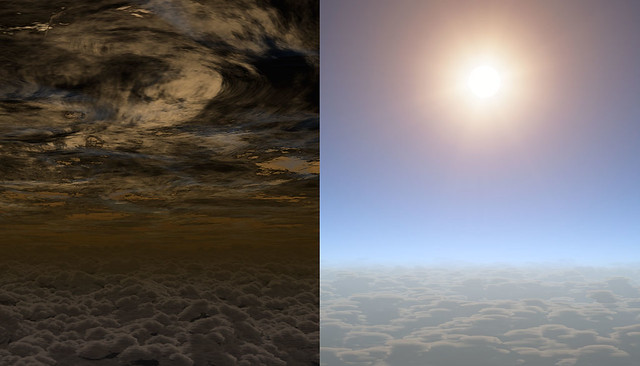 This artist’s illustration shows what the skies may look like on different alien planets.

“This discovery is a significant milepost on the road to eventually analyzing the atmospheric composition of smaller, rocky planets more like Earth,” said John Grunsfeld, assistant administrator of NASA’s Science Mission Directorate in Washington.

“Such achievements are only possible today with the combined capabilities of these unique and powerful observatories.”

Clouds in a planet’s atmosphere can block the view to underlying molecules that reveal information about the planet’s composition and history. Finding clear skies on a Neptune-size planet is a good sign that smaller planets might have similarly good visibility.

The astronomers, who are planning to examine more exo-Neptunes in the future, won’t be short of research material. As of September 12, 2014, astronomers had identified 1822 exoplanets and the numbers are increasing almost daily. Since the start of 2014 alone, around 850 exoplanets have been discovered.

The researchers intend applying the same methods used to reveal some of HAT-P-11b’s secrets to smaller so-called super-Earth exoplanets — massive, rocky relations to Earth with up to 10 times our home-world’s mass. There are no super-Earth’s in our solar system with all the other rocky planets, Mercury, Venus and Mars, being smaller than Earth but other telescopes have so far found a host of these orbiting other stars.

Another joint NASA/ESA project, the James Webb Space Telescope, scheduled for a 2018 launch, will focus on that growing catalogue of super-Earths searching for signs of water vapor and other molecules. But determining what may lie beneath exoplanetary atmospheres, finding signs of oceans that might be the soup where alien life exists, is still some way off.