HD 20782b: The Most Eccentric Planet Ever Discovered

A team of astronomers have recently detected an exoplanet situated 117 light years away from us that boasts the most eccentric orbit known to date.

The planet, designated as HD 20782b, orbits a yellow dwarf star which is a part of a wide binary system with star HD 20781 (astronomers also detected two exoplanets orbiting around this star), both stars are located in the constellation of Fornax. This binary system was the first known case of planetary systems around both stars.

After analyzing data, scientists concluded that planet HD 20782b has the most eccentric orbit of any world ever observed, with a measure of 0.96. But what does it mean? Planets tend to have circular orbits around their host stars, but in some cases, they take extreme elliptical shape orbits. The orbital eccentricity (e) of an object may take the following values: 0 is a circular orbit, values between 0 and 1 form an elliptical orbit, 1 is a parabolic escape orbit, and greater than 1 is a hyperbola (astronomers have never observed a planet with e>=1). In our solar system Venus has the least eccentricity of any planet 0.007 – with a nearly perfect circular orbit. Earth also has a very low eccentricity of .017. On the other side, Sedna has the most extremely eccentric orbit e=0.85. Eccentric orbit refers to an extreme elliptical orbit that takes objects close to the host star and then slingshots it far, far away, before it finally returns for another pass.

HD 20782b has an eccentricity of 0.96 this means that the planet moves in an almost flattened ellipse, journeying a long path from its host star and then coming extremely close to the star just 8 millions km (that is closer than Mercury is to our sun).

It’s around the mass of Jupiter, but it’s swinging around its star like it’s a comet, that’s a pretty bizarre planet by scientific standards. 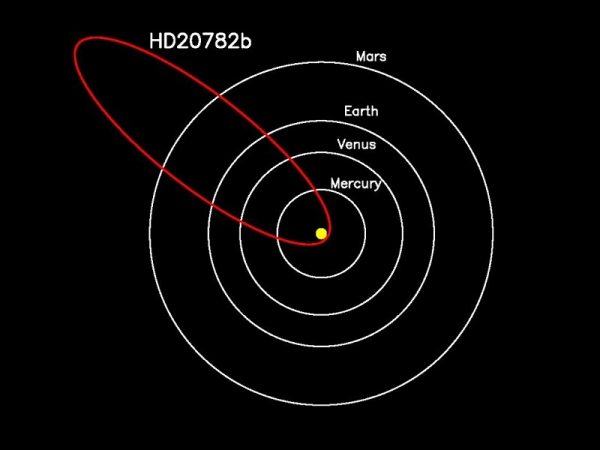 The discovery is not just for curiosity’s sake — its provides “a particularly lucrative observing opportunity” for studying the planetary atmosphere of an eccentric-orbit planet.

Astronomer Stephen Kane and his colleagues used a satellite-based telescope to collect light data from the planet as it made its closest approach to its sun.

The reflected light could tell us more about how the atmosphere of a planet like HD 20782 responds when it spends most of its time far away from its star, but then has a very close approach where it’s flash-heated by the star,

Therefore, astronomers’ observations suggest that the exoplanet might have an atmosphere with highly-reflective cloud cover, resembles to that of Jupiter.

But what this planet has so eccentric orbit? Astronomers don’t know yet, but they think that other unseen planet could be guilty for HD 20782b extreme path.

It could be that there was originally more than one planet in the system, and one planet developed an unstable orbit that brought the two planets too close together. This collision or near-collision might have ejected one planet from the system entirely and pushed HD 20782b on its eccentric path. The planet is in a binary star system, so it might also be the case that the second star in the binary made a close approach that threw HD 20782 off a more circular orbit.

HD 20782b remains an intriguing planet, studying the orbits and atmospheres of such eccentric planets are key milestones towards unlocking the origin and nature of these mysterious objects.