HD 106906b: The Super-Jupiter Planet That Shouldn’t Be There

A super-Jupiter planet, dubbed HD 106906b, discovered last year is sitting at a large distance from its host star, so far away that some believes it was kicked out of star’s local neighborhood.

The star HD 106906 is located 300 light years away from Earth in the constellation Crux (visible in the southern hemisphere), a pretty similar star to the Sun but much younger: about 13 million years old, compared to Sun’s 4.5 billion years. Like many young stars, it is surrounded by a massive disk of gas and dust. What is particularly interesting about this star system is the planet HD 106906b.

It’s a big planet with a mass 11 times that of Jupiter. Such giants are common in our galaxy, some are even larger — Kappa And b has a mass about 12.8 times greater than Jupiter’s. Thus, it is not ‘the mass’ that is so strange about HD 106906b, but its local position. The planet is very far from its star, far beyond what we can observe here in our own solar system. It is more than 60 billion miles from its host star, or 650 times the distance from the Earth to the Sun, or 16 times farther than Pluto orbits the sun. There’s no real comparison for that distance in our solar system.

One of the hypothesis to explain its unusual distance from its star is that HD 106906b has been formed much closer before it have been violently kicked out of its orbit. The planet’s orbit is tilted by 21° relative to the thick ring of comets orbiting near the star. As it is likely the planet and the comets formed from the same disk of material, therefore, it could be a clue of this strange eventful history. HD 106906b could also look more like Saturn than Jupiter, scientists say. It may have a dusty ring system of its own, as it have captured material from the comet belt when it was expelled.

We think that the exoplanet itself could have captured material from the comet belt, and that the planet is surrounded by a large dust ring or dust shroud. We conducted three tests and found tentative evidence for a dust cloud, but the jury is still out,

The measurements we made on the planet suggest it may be dustier than comparison objects, and we are making follow-up observations to check if the planet is really encircled by a disc — an exciting possibility,

By analyzing the images, taken by the Hubble Space Telescope and the Gemini Planet Imager, of the comet belt, the researchers could see that it extended much farther away and was extremely lopsided, vertically thin towards the planet and on the opposite side the dusty material was vertically thick and truncated.

These discoveries suggest that the entire planetary system has been recently jostled by an unknown perturbation to its current asymmetric state, 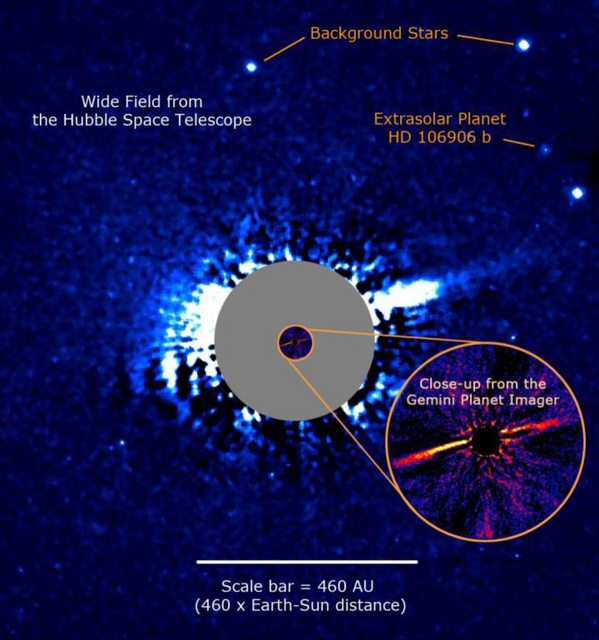 So, why the planet was pushed away from its birthplace? The disturbance could have been caused by another star which passed too close and perturbed the inner planets, or maybe another giant planet located further inside the system may have interacted with the exoplanet.

The ejection of a planet is not so rare event around young stars. Some scientists think that in the infancy of our solar system, Jupiter have kicked out at least one planet.

For now, we have detected only HD 106906b orbiting around its host star, but perhaps, there are other planets in the area much closer to it than the comets belt is. The ‘empty‘ area visible in the central region leaves plenty of questions left unanswered.

HD 106906 star system is a relatively young system and may have some similarities to our solar system providing invaluable insights on how it has evolved to its present state.

Lisa Kaltenegger gave some commentary about this planetary system.

What [Kalas] and [Rajan] found is a really interesting, oddball configuration. It’s something that surprises scientists. We really don’t know how this actually fits together. The cometary plane and the planetary object far away — how did they form? How did it come about?

Is this a picture of our solar system when it was 13 million years?

We know that our own belt of comets, the Kuiper belt, lost a large fraction of its mass as it evolved, but we don’t have a time machine to go back and see how it was decimated,

One of the ways, though, is to study these violent episodes of gravitational disturbance around other young stars that kick out many objects, including planets.

The HD 106906 system will remain under observation, and it may harbor other mysteries. The results were published in the Astrophysical Journal (Preprint available here).