On October 12, 2017, the asteroid 2012 TC4 is expected to pass dangerously close to Earth. The exact distance of its closest approach is uncertain as well as the estimated size of the asteroid ramain unknown ~ it vary from 40 feet to 130 feet across, it could be as large as 40m wide – just under the height of Statue of Liberty.

Based on observations in October 2012, when this house-sized asteroid missed our planet, astronomers estimate its size as twice the size of the meteor that exploded over the Russian city of Chelyabinsk in February 2013, resulting in injuries to 1,500 people and damaged more than 7,000 buildings.

That means if 2012 TC4 hit our planet the impact could be even more destructive.


It is something to keep an eye on. We could see an explosion in the air that might break the windows, depending on where it occurs.

said Judit Györgyey-Ries, an astronomer at the University of Texas’ McDonald Observatory.

2012 TC4 was discovered on October 4, 2012 by the Pan-STARRS Observatory in Hawaii, and less than a week later it gave Earth a close shave coming within 69,000 miles (94,800 kilometers) ~ 0.247 LD (lunar distance). Analysis of the orbit of the 2012 TC4 suggests that it is an elongated and rapidly rotating object it has made a number of close passes by the Earth in the past. Now, astronomers are working to determine the exact path of 2017 fly-by and the probability of a possible impact.

There’s one in a million chance that may come to us.

The size was estimated from the brightness, but we don’t know the reflectivity. So it could be smaller or larger, assume from 10 meters (around 40 feet) to 40 meters (about 130 feet.)

A 40-meter iron object would go through the atmosphere and make a crater; a 10-m rocky object would be hardly noticed. 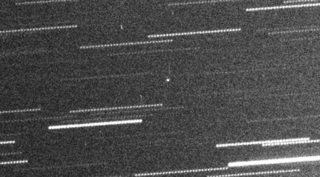 Makoto Yoshikawa of the Japanese Aerospace Exploration Agency (JAXA) is convinced that there is no chance the asteroid will hit Earth. He said:

The distance is very small. But this distance does not mean a collision.

Although it has a large uncertainty along the orbit, it is much less than the radial uncertainty, so it just changes the time of the closest flyby. I would say based on this, that there is no chance of impact in 2017.

Györgyey is also aware of the incertitude, she admits that more data and observations need to be collected to narrow the uncertainties.

There are 1,572 potentially hazardous asteroids (PHA) detected. None of the known PHAs is on a collision course with our planet, although astronomers are finding new rocks continuously.