Scientists have experienced a unique astronomical event, that of an exploding Nova Star. The team of astronomers has witnessed the images of a thermonuclear explosion in the form of a fireball coming from a nova star. The astronomers could track down the explosion as it kept expanding.

That is the conclusion from a research collaboration led by Georgia State University Astronomer Gail Schaefer that includes 37 researchers (many who are National Science Foundation (NSF)-funded) from 17 institutions.

“This is the first time astronomers have been able to witness an expanding fireball with such great detail, rather than as a tiny point of light way out in the galaxy,” Schaefer said. “It was amazing to see the material expanding outward each day after the explosion.”

“Everything has come together to give us a really good look at one.” A nova is the thermonuclear explosion of hydrogen on the surface of a dead star called a white dwarf. When a white dwarf comes into a very close orbit with a companion star, it can suck hydrogen off the other star onto its own surface.

Once this hydrogen ocean reaches a depth of around 200 metres, gravity produces enough pressure to trigger thermonuclear fusion — essentially a stellar atomic bomb — that is visible many light years away.

According to the university, an amateur astronomer by the name of Koichi Itagaki first discovered a “new” star on August 14, 2013. That star, which was named Nova Delphinus 2013, was “quickly confirmed as an optical transient by a number of amateur and professional observers, and also confirmed spectroscopically as a nova by amateurs and professionals who observed independently at nearly the same time,” according to the American Association of Variable Star Observers (AAVSO).

“Within 15 hours of the discovery of Nova Del 2013 and within 24 hours of the actual explosion, astronomers pointed the telescopes of the CHARA Array toward the nova to image the fireball and measure its size and shape,” GSU said. “The size of Nova Del 2013 was measured on 27 nights over the course of two months. The first measurement represents the earliest size yet obtained for a nova event.”

The CHARA facility is on the grounds of historic Mount Wilson Observatory in the San Gabriel Mountains of Southern California and is operated by Georgia State. The CHARA Array uses the principles of optical interferometry to combine the light from six telescopes to create images with very high resolution, equivalent to a telescope with a diameter of more than 300 meters. 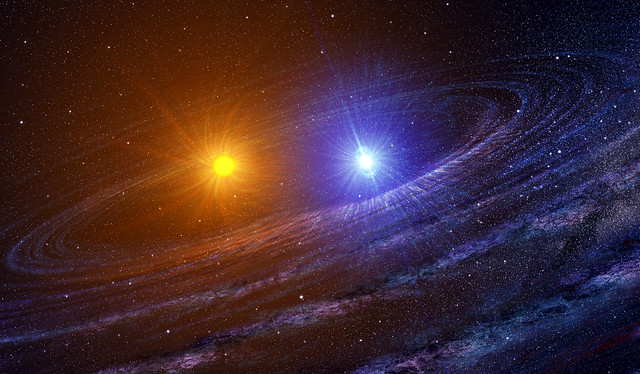 Nova Del 2013 was found to be 14,800 light-years from the Sun. This means that, while the explosion was witnessed on Earth last August, it actually took place nearly 15,000 years ago.

Knowing the nova’s distance along with its angular size allows the determination of the physical size of the fireball at the different times of observation.

During the first CHARA observation on Aug 15, 2013, the size of the fireball was roughly the size of Earth’s orbit.

Two days later, it was already the size of Mars’ orbit, and by day twelve, the fireball surface would extend out to the orbit of Jupiter.

When last measured 43 days after the detonation, it had expanded nearly twenty-fold from the first measurement to nearly the size of Neptune’s orbit, the outermost planet in earth’s solar system.

“Thousands of novae have been discovered since the first one was recorded in 1670, but it has only become possible in the last decade or so to image the earliest stages of the explosion thanks to the high resolution achieved through interferometry,” GSU concluded. “Studying how the structure of novae changes at the earliest stages brings new insights to theoretical models of novae eruptions.”