For The First Time Astronomers Observe Volcanic Activity On Super-Earth

Forty light years away in the Cancer constellation is a yellow star much like our sun. However, it is not alone, it has a smaller companion, a red dwarf star which is separated by over one thousand times the distance from the Earth to the Sun. 55 Cancri is the name of this binary star system. It also has a special feature: the yellow dwarf (55 Cancri A) have five exoplanets and may possibly host other worlds that we could not detect yet.

The most remarkable of these five planets, quickly attracted the attention of astronomers, is the exoplanet Dubbed 55 Cancri e. This rocky planet is three times the size of Earth and eight times its mass.

This “super-Earth” is very close to its parent star, about 26 times closer than Mercury is to our Sun. Its rushes around its star every 18 hours (in contrast to Earth’s 365 days). However, there is neither day nor night, the planet is tidally locked and always presents the same face to its sun, as the moon does around the Earth.

Since its discovery, various theories was proposed about it. We first thought it could be a “water world” – a rocky core surrounded by a layer of water in a ‘supercritical’ state: a mixture of both liquid and gas so the whole planet is topped by a blanket of steam.

But what made ​​55 Cancri e famous is another theory. In 2012, Yale researchers have reported that because the solid planet made of carbon-rich material and as a result of the temperatures and pressures in the planet’s interior (over 2000 degrees ) ​​55 Cancri e is a diamond planet.

The surface of this planet is likely covered in graphite and diamond rather than water and granite.

Said then Dr Nikku Madhusudhan lead author of a paper, published in the Astrophysical Journal.

Yet this beautiful image did not last forever. In 2013, new research led by the University of Arizona challenged the notion of ‘diamond’, pointing that 55 Cancri could still have a lower carbon to oxygen ratio.

In theory, 55 Cancri e could still have a high carbon to oxygen ratio and be a diamond planet, but the host star does not have such a high ratio.

Johanna Teske said then in a statement. 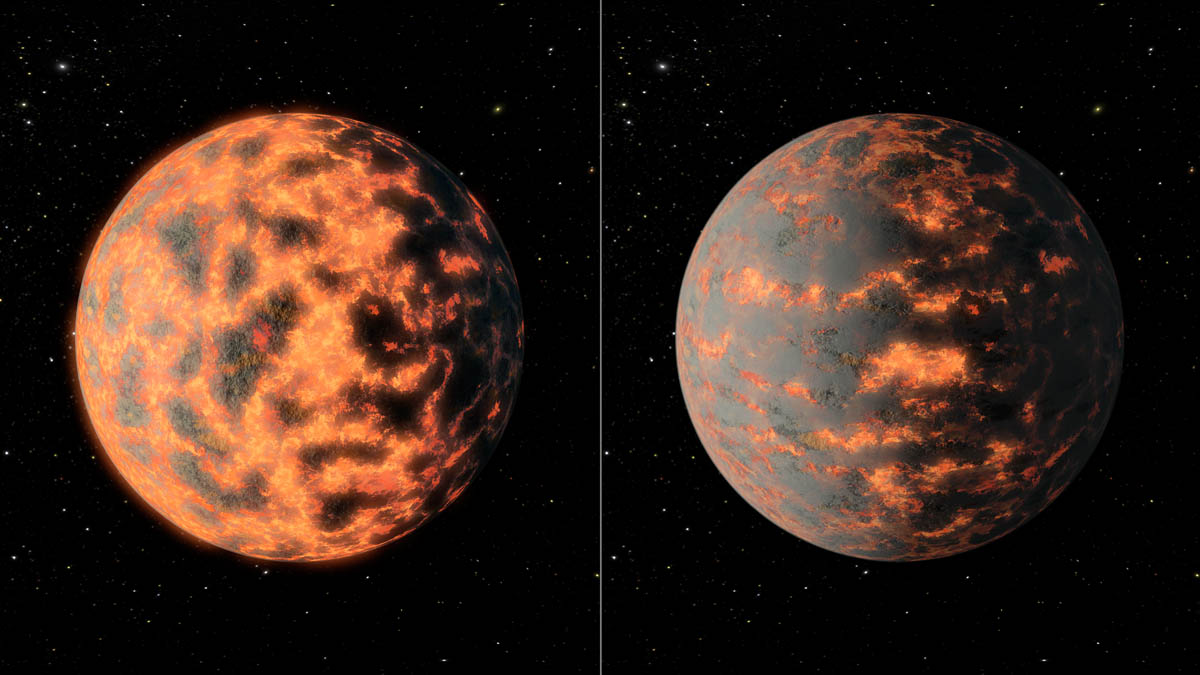 An artist’s depiction of the exoplanet 55 Cancri E. ©NASA/JPL – Caltech/R.Hurt

Today is the ‘weather’ of this super-Earth is in the spotlight of scientific news. A study has just been published in the Monthly Notices of the Royal Astronomical Society by researchers at the University of Cambridge (England), which detected very large temperature fluctuations on the surface of 55 Cancri e that, according to them, would be the first time when atmospheric variability is observed on a rocky planet outside our solar system.

This is the first time we’ve seen such drastic changes in light emitted from an exoplanet, which is particularly remarkable for a super-Earth.

Said Dr. Nikku Madhusudhan a co-author on the new study.

No signature of thermal emissions or surface activity has ever been detected for any other super-Earth to date.

As explanation of these variations — a threefold change in temperature over a two year period — scientists hypothesize a significant volcanic activity:

Huge plumes of gas and dust which occasionally blanket the surface, which may be partially molten. The plumes could be caused by exceptionally high rates of volcanic activity, higher than what has been observed on 10, one of Jupiter’s moons and the most geologically active body in the solar system.

We saw a 300 percent change in the signal coming from this planet, which is the first time we’ve seen such a huge level of variability in an exoplanet.

While we can’t be entirely sure, we think a likely explanation for this variability is large-scale surface activity, possibly volcanism, on the surface is spewing out massive volumes of gas and dust, which sometimes blanket the thermal emission from the planet so it is not seen from Earth.

Therefore, the famous ‘diamond planet’ might be a volcanic hell resides so close to its parent star.

When we first identified this planet, the measurements supported a carbon-rich model

But now we’re finding that those measurements are changing in time. The planet could still be carbon rich, but now we’re not so sure — earlier studies of this planet have even suggested that it could be a water world. The present variability is something we’ve never seen anywhere else, so there’s no robust conventional explanation. But that’s the fun in science — clues can come from unexpected quarters. The present observations open a new chapter in our ability to study the conditions on rocky exoplanets using current and upcoming large telescopes.