Flat Universe Theory: What Does It Mean?

Our universe have some peculiar properties, properties that couldn’t be explained by conventional Big Bang theory. For example, it’s flat, meaning it’s at just the right mass density that it will neither expand forever nor collapse back on itself. Why should it be flat? And completely opposite sides of the universe that haven’t had time to interact are at the same temperature. How can this possibly be?

These were two of the biggest questions in cosmology. It wasn’t until the 1980s, with the theory of cosmic inflation proposed by Alan Guth, that we found some answers. Inflation took us back to the beginning of the universe and, with exotic physics like repulsive gravity and false vacuums, answered the why and what of the Big Bang.

The first problem introduced by the old Big Bang theory was called the horizon problem.

Which is basically the problem of trying to understand how the universe got to be so uniform. Why does the universe look the same over there as it does if you look that way? And why was this a problem?

Well, think of a cup of tea. If you pour milk into your tea, it’ll take some time for the molecules to interact and eventually come to about the same temperature, but it won’t happen instantly. The same is true on a larger scale. The fastest any two objects can interact is as soon as light has had time to travel between them.

Well, according to conventional Big Bang theory, light hasn’t had time to travel from one side of the observable universe to the other, so why should they be at the same temperature?

Inflation gets around that in really a very simple way, is that if we trace back the universe that we’re looking at now to what it looked like before inflation, it was vastly smaller than anybody would have thought without the inflationary theory.

Vastly smaller is not an exaggeration. Before inflation, everything in our observable universe fit in a volume a billionth the size of a proton. Then the universe went through two expansions, inflation and after. Both expanded space by a factor of 1028, but the second expansion took 13.8 billion years. That first expansion, inflation, took 10 to the minus 38 seconds. It’s just an unfathomable rate. 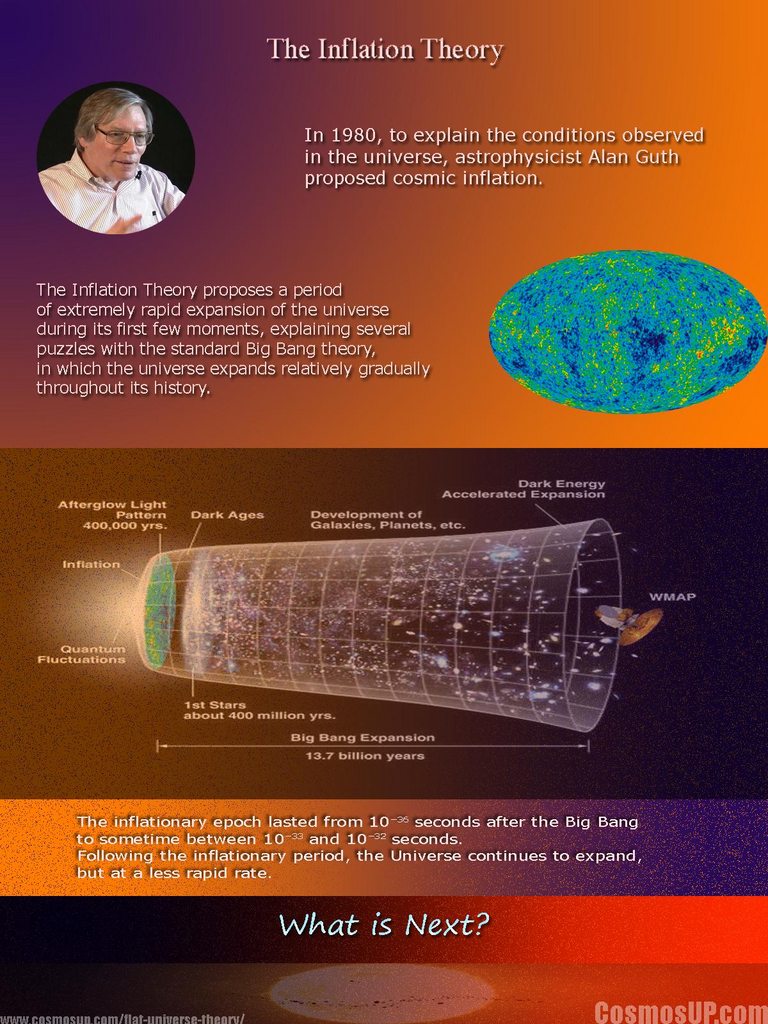 So now we know the universe was super tiny. Well, the true genius of Guth’s theory was not the incredibly tiny universe, but how it could have expanded so fast. Inflation provided the mechanism for expansion — repulsive gravity.

In Newton’s theory of gravity, gravity was always attractive. There just was no other option, but it turned out that the more complicated theory of general relativity actually allows for the possibility of a repulsive form of gravity.

Yes, in very specific circumstances, gravity can provide a push, not a pull. It comes from something called the false vacuum, a state of matter in the early universe that allows expansion of space while the mass density stays constant, and that understanding for the mechanism of inflation brought a solution to the horizon people.

The second obstacle The second problem was called the flatness problem. Why is the universe so flat, and what do I mean by flat? Well, the curvature of the universe is defined by the mass density of space, or the amount of energy and mass per volume. If there is a lot of matter, the universe is closed and collapses back in on itself.

The mass density we have measured so far appears to be exactly critical. Why is that? In fact, if it had started even slightly open or closed, it would have been pushed even further away from critical density over time by the expansion of the universe, just like the longer an arrow has to travel toward a target, the straighter you had to have initially shot the arrow. But we’re so close to hitting a bullseye. We’re so close to critical density. Why?

Inflation forces the universe toward critical density. How?

General relativity implies a direct relationship between the mass density and the geometry of space or the flatness, so as space expands, the geometry gets flatter. Imagine space like the surface of a balloon. As you blow the balloon up, the surface gets flatter and flatter. Space does this in three dimensions.

And, boom, flatness problem solved. So you may be wondering, if inflation theory was so revolutionary and imaginative, why haven’t we heard more about it? Well, inflation is still a hot topic of debate. As we discussed, it solves many of the problems of conventional Big Bang theory and is widely accepted throughout the scientific community, but like all good theories, it has to make more predictions which we then observe.

We’re hoping for more observations that support inflationary theory, or whatever theory that might improve upon it. That’s what we’re working towards.