Using the technique of gravitational microlensing, a team of astronomers have discovered a Neptune-like exoplanet, the first Neptune analog planet to date.

Identified as MOA-2013-BLG-605Lb, the planet has a mass similar to that of Neptune or a super-Earth orbiting a low-mass red dwarf star with a mass 20% of that of Sun, at a distance of 4.2 AU (astronomical unit) which is 8.9 times the expected position of the snowline around its host star. In astronomy, the snow line, also known as the frost line, is the particular distance from a young star, protostar, where the temperature becomes cool enough for water to condense into solid ice grains.

The planet has 21 times the mass of Earth with an estimated surface temperature of ∼26 K (-247°C) which makes MOA-2013-BLG-605Lb the coldest low-mass exoplanet found yet and it could be the first known example of a Neptune-like planet in terms of mass and temperature.

The formation of the ice giants Uranus and Neptune is not well understood. In theory, the gas giant planets like Jupiter and Saturn are believed to form through the accumulation of small icy planetesimals into solid cores of about 5-15 Earth-masses in the region beyond the snow-line at snowline ≈ 2.7 (In our solar system this distance is correspondent the distance beyond the dwarf planet Ceres) where the protoplanetary disk is cold enough for ices to condense.

However, such a scenario is unable to form smaller ice giants like Uranus and Neptune at their current orbital positions, due to the low density of planetesimals and slow evolution in these orbits. Astronomers think that Uranus and Neptune formed in the Jupiter-Saturn region between ∼ 5 and ∼17 AU, then migrated outwards to the current position.

So, the distribution of such cold ice-giant planets in other solar systems is important for understanding the formation of our own cold ice giants. It also could be that exo-neptunes play an important role in the development of life in some exoplanetary systems, whether or not they play this role in our own Solar System.

Since the discovery of the first exoplanet (planet beyond our solar system orbiting stars other than the sun) 51 Pegasi b in 1995, many other exoplanets were discovered but they are quite different from those in our own Solar System. The detection of planets similar to those in our own Solar System has been more difficult. Only Jupiter analogs have been detected orbiting stars like the sun.

In 2009, NASA launched the Kepler Mission, an observatory telescope in space dedicated to finding planets outside our solar system. Gazing at a fixed spot in the constellation Cygnus, the telescope continually monitored 150,000 stars for planets.

Kepler’s 150,000 targets contain about 3000 red dwarfs and more than a hundred planetary systems have been found orbiting these stars.

While Jupiter/Saturn and Venus/Earth like planets have been found orbiting dwarf stars. Very cold, low-mass planets have yet to be explored. Cold ice-giants like Uranus and Neptune are very difficult to detect with the radial velocity and transit methods owing to their long orbital periods (80-160 years), low orbital velocities and low transit probabilities.

Kepler’ results show that smaller planets are more common than larger planets around dwarf stars, and planets with radii of ∼1.25 Earth radius are the most common planets in these systems.

explained one of the authors. So detecting a neptune like planet around a dwarf star is really a big deal.

In the new study, uploaded on arxiv’ website, astronomers used the gravitational microlensing method to detect and measure the mass of the first Neptune analog MOA-2013-BLG-605Lb. The gravitational microlensing method is a complementary to the other planet detection techniques, also capable to detect planets around dwarf stars and even brown dwarfs because it does not rely on the light from the host stars. 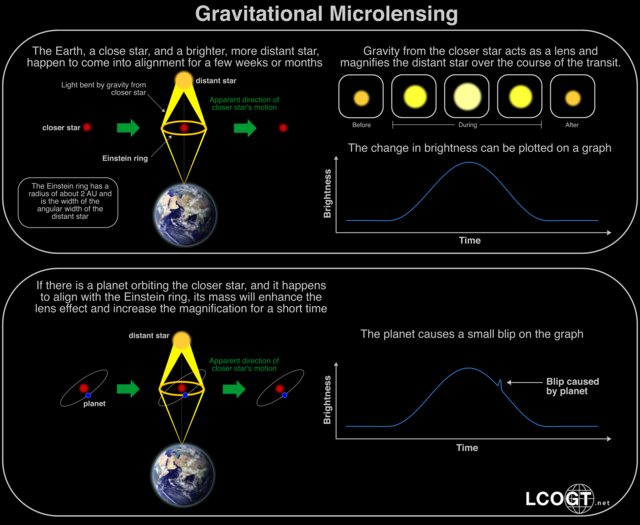 To find MOA-2013-BLG-605, astronomers carries out a microlensing survey toward the Galactic bulge from the Mt. John University Observatory in New Zealand. The microlensing event MOA-2013-BLG-605 was announced by the MOA Alert System on 2013 Aug 30. At the time of its discovery, MOA recognized this event as a possible free-floating planet candidate. Nearly four weeks later, on 2013 Sep 25, OGLE-2013-BLG-1835 was confirmed as a planet in orbit around its host dwarf star.

This discovery suggests that Neptune-like planets orbiting at ∼ 11 snow-line are quite common. They may be as common as planets at ∼ 3 snow-lien, where microlensing is most sensitive, so processes similar to the one that formed Uranus and Neptune in our own Solar System may be quite common in other solar systems.