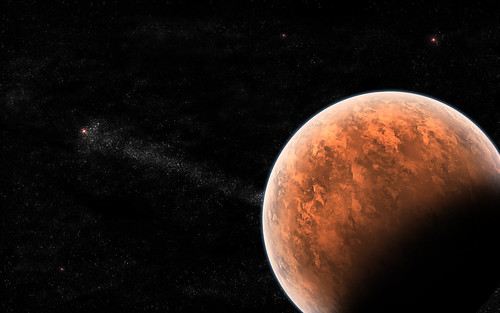 Another “special” gas giant in the sense that its orbital plane aligns perfectly with our line of sight i.e. it regularly passes through the face of its parent star as seen from Earth. This “transiting” of the planet allows us to more accurately calculate its size by analyzing the amount of its parent star’s light that is blocked off as it passes and more importantly determine the composition of its atmosphere through Spectroscopy, the study of interactions between radiation and matter (in this case, the interaction between gases and vapors in the planet’s atmosphere and its sun’s starlight).
Using this method they have detected the presence of sodium vapor and more recently (October 2009) some water vapor, carbon dioxide, and methane in the planet’s atmosphere. It is also only the second planet revealed to possess organic compounds, with HD 189733 b being the first one on October 5, 2005.