How Far Voyager 1 Is now?

Launched in 1977, NASA spacecraft Voyager 1 have been coasting its way through the further reaches of our solar system.

Voyager 1 is currently 20,077,434,531 km from the earth and decreasing (as the earth is currently orbiting towards voyager faster than voyager is traveling). It is in a zone called “Interstellar Space”, an area between our solar system and the next.

Signals from voyager 1 take approximately 18.5 hours to reach the earth. NASA expected to lose connection with voyager years ago but due to advances in receiver technology they are still able to receive the very weak signals. The signals are being received by the arrays of the Deep Space Network of large radio telescopes at sites in California, Spain, and Australia.

Sadly we may never see photos of where voyager goes next since the camera system was turned off in 1990 to save battery power (and the camera program was deleted to free up storage and processing power). So the only signals being sent back from voyager are about plasma, magnetic fields, and radiation.

Map from NASA so you can picture where the voyager spacecraft are ©NASA.

There are some great photos of our solar system from 1990 when the famous “faint blue dot” photo of earth was captured. 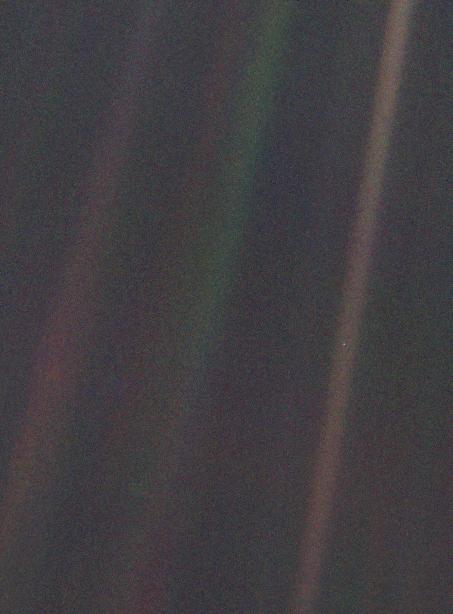 Here is the earth ©NASA.

Voyager 1 was launched to investigate Jupiter and Saturn. After the spacecraft completed its primary missions it were aimed out of our solar system. The purpose of its extended mission is to explore the area beyond our Suns magnetic field. Searching for the boundary to the “heliopause” (estimated to be between 8 and 14 billion miles from the sun).

Voyager 1 exited the heliopause in 2012, measuring a radius of 18 billion miles from the sun.
Voyager 1 does use Alpha Centauri as its guide star.
Voyager 1 is directed towards the constellation of Cameloparadalis. Drifting within 1.6 light years of the star AC+79 3888 in 40,000 years.

There is unofficial twitter account of Voyager 2 (Voyager 1 sister) that describes how far away it is and what activities it’s performing. Occasionally the account also provides information regarding Voyager 1.