Extra-solar planets come in all sizes — from dinky rocky worlds that measure up to Mercury to massive gas giants that would dwarf Jupiter. Exoplanet hunters have developed a sophisticated array of telescopes and techniques to detect this multitude of exoplanetary girths, but we are now on the verge of potentially detecting exoplanets of different shapes.

According to a new paper, scientists may soon start spotting planets that have gotten stretched out by the gravity of the stars they orbit. If you took cross sections of Earth, it wouldn’t be perfectly spherical. That’s partly due to the Earth’s rotation, but another reason is because the Moon pulls on Earth’s water, creating bulges around its waistline. Now imagine if that gravity weren’t coming from a small, cold moon, but from a big, hot star instead. 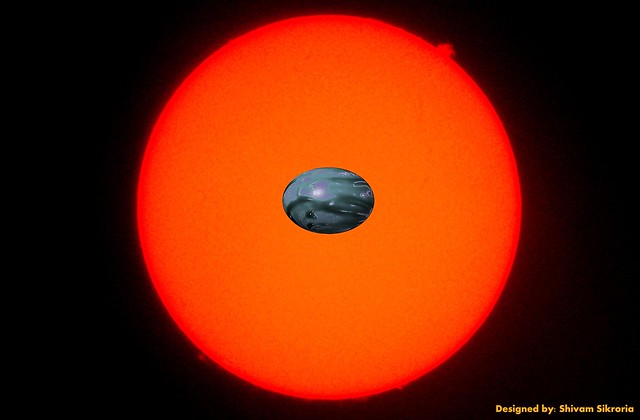 An artist’s impression of a stretched rocky planet in orbit around a red dwarf star. So close to the star, there is a difference in the strength of the gravitational field on each side of the planet, stretching it significantly (click to zoom)

“Imagine taking a planet like the Earth or Mars, placing it near a cool red star and stretching it out. Analysing the new shape alone will tell us a lot about the otherwise impossible to see internal structure of the planet and how it changes over time,” Prabal Saxena of George Mason University, said.

Red dwarf stars are significantly smaller and cooler than our own Sun, and are the most common variety of stellar bodies in the Universe. Saxena and his team examined exoplanets orbiting close to red dwarf stars.

Because they are so close to their suns, they are gravitationally locked, causing one face of the planet to constantly face toward their stars, similar to the way the Moon revolves around the Earth.

By modeling several exoplanetary configurations around red dwarf stars, Prabal’s team in the cases where planetary bodies were tidally locked, their elongated shapes should be detectable, using current technology, as those worlds pass in front of their star.

As pointed out by the researchers, detecting these tidal distortions should become easier when next-generation observatories like the James Webb Space Telescope (JWST) and the European Extremely Large Telescope (E-ELT) come online in the next few years.

It will be interesting to find one of these misshapen exoplanets, but even more interesting to spot a habitable world with this tidal distortion. Then scientists can really get to work understanding how its shape may impact its life-giving potential.