Epochal Discovery In Space: The First Cousin Of Earth That Could Host Alien Life!

Astronomers have found the first Earth-sized exoplanet within a star’s habitable zone. The planet is the closest thing yet to the coveted ‘Goldilocks’ orb that scientists have long sought — a world roughly the size of Earth orbiting a star at a distance that is just right for liquid water to exist

The planet, named Kepler-186f, is one of at least five planets orbiting a star about 500 light-years away. But unlike the other four planets, Kepler-186f is far enough away from the star that water could persist in a liquid state — instead of boiling off as a vapor. That raises the exciting possibility that life could evolve on the planet’s surface. 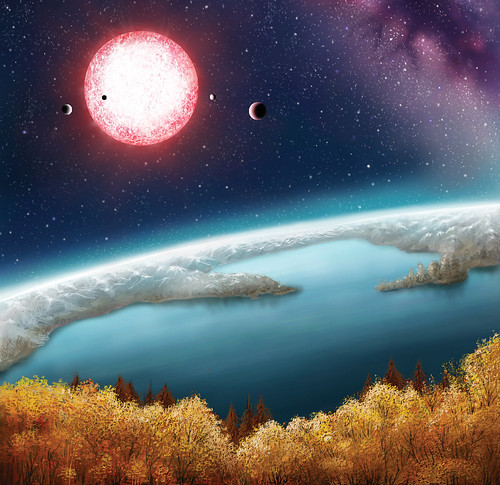 While planets have previously been found in the habitable zone, they are all at least 40 percent larger in size than Earth and understanding their makeup is challenging. Kepler-186f is more reminiscent of Earth.

“The discovery of Kepler-186f is a significant step toward finding worlds like our planet Earth,” said Paul Hertz, NASA’s Astrophysics Division director at the agency’s headquarters in Washington.

Until now, the closest thing to an Earth-sized planet in the habitable zone of another star was a planet about 40% bigger than Earth around the star Kepler-62. Planets smaller than Earth have also been spotted, but they are not in their star’s habitable zone.

The planet is the latest of the bonanza coming from the Kepler space telescope, which spent four years staring at a patch of sky in the constellations Cygnus and Lyra before suffering a mechanical failure last May. Kepler looked for exoplanet transits, in which the light of a star dims slightly as an orbiting planet passes across its face as seen from Earth.

Kepler-186f is different because it orbits its star at a distance where liquid water could theoretically exist. The planet gets about one-third of the heat and light from its star that Earth gets from the Sun.

To stay warm enough for water, it would need to have a thick carbon dioxide atmosphere, perhaps generated by outgassing volcanoes, says Lisa Kaltenegger, an exoplanet researcher at the Max Planck Institute for Astronomy in Heidelberg, Germany. The planet’s small size suggests that it is probably rocky like Earth, says Quintana. But she and her colleagues cannot say for sure, because they know only its physical size and not its mass.

“This planet will forever be inscribed in the history books as the first world discovered beyond our own where we — and possibly other living things — might feel comfortable”, Lisa’ said.

So what are scientists going to do next? This is more of a stepping stone in the search for earth-like planets and extraterrestrial life than a destination. Because the star is so far away, we can’t really tell if it has an atmosphere or learn much more about it, and definitely can’t visit it.

Although the Kepler telescope is no more, there are several telescopes in development that will help us find more exoplanets — such as NASA’s James Webb Space Telescope, set to launch in 2018, and the Giant Magellan Telescope, a land-based instrument in Chile that will be finished in 2020. You can expect to hear of many new exoplanet discoveries in coming years — both from these new telescopes and old Kepler data — and hopefully some will be of earth-sized planets close enough for us to learn more about.