EPIC-1166: The Most Massive Mini-Neptune Ever Found

New class of planetsIn January of this year, astronomers announced the discovery of BD + 20594b, a rocky world, half the diameter of Neptune. Its 2.23 times Earth’ radius and 16 times as massive as our planet composed entirely of rock.

Now, astronomers find another planet of this new class of exoplanets. The newly discovered planet, designed as EPIC212521166 b, is a mini-Neptune world with a radius of 2.6 and a mass 18 times that of the Earth, making it the most massive planet with a mini-Neptune radius yet found. This discovery proofs that the giant telluric are not rare in the universe.

That means it has Neptune mass but only 67% its radius, making EPIC-1166 the most massive mini-Neptune ever found

EPIC212521166 b orbits on a 13 days period around an old k-type star (stars smaller than our sun but slightly bigger than red dwarfs), an ancient eight-billion years old star 0.74 times the mass of the Sun and 0.71 times its radius.

With all these scientific data we can easily calculate EPIC212521166 b’ density which is 5.7 almost the same as our planet… this is extremely bizarre. Given that the planet orbits relatively close to its host star at 0.1 AU and taking into account the old stellar age of 8 billion years, such planet’ density is unlikely.

So to explain this “anomaly”, astronomers propose 2 hypotheses on planet’s composition:

It could also be 50% rock and 50% water. Or mostly rock, with some water and some hydrogen. There’s no easy way to tell these apart. 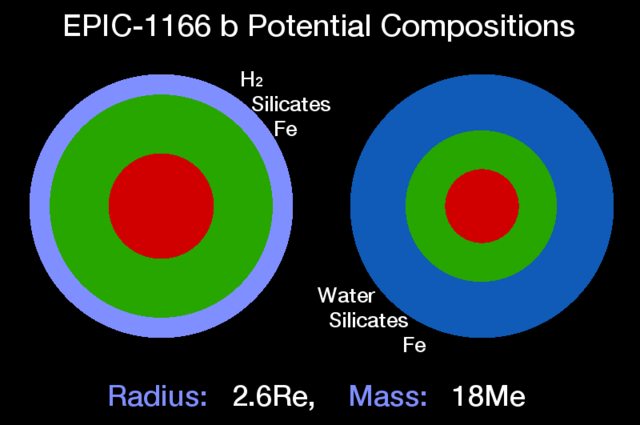 So why is this a big deal? Planet formation models show that, once a planet grows to around 10 time Earth masses, it should begin to rapidly draw in gas from the surrounding gas disc until it becomes a gas Giant. In the case of this newly planet, astronomers think it likely migrated inwards to its current position but the lack of a thick hydrogen atmosphere is puzzling.

My favorite way of solving this puzzle (and it is pure speculation) is through giant impacts between planets.

Osborne think Epic-1166 system was once a multi-planetary system but over time it dynamically destabilized and thus followed violent cosmic collisions between the early planets resulting in today’ single dense mini-Neptune.

The fact that the star is much older than the Sun and that we do not see any other planets in the system, could explain both grow a large planet and also blast away its large hydrogen atmosphere.

The proximity of this system to us make it a prime candidate for future observations. Finding new mini-Neptune will surely help to answer some important questions in the planetary field.

Large super-Earths and mini-Neptunes are an interesting and diverse population to study. Lying in the transition regime between terrestrial planets and gas giants, they can provide direct constraints on giant planet formation theory

Wrote the authors in the paper.