In case you need a reminder that the solar system was a harsh place to grow up, the early Earth looks like it was in the middle of a shooting gallery. Asteroids and comets that repeatedly smashed into the early Earth covered the planet’s surface with molten rock during its earliest days.

New research shows that more than four billion years ago the surface of Earth was heavily reprocessed – or melted, mixed, and buried – as a result of giant asteroid impacts.

A new terrestrial bombardment model, calibrated using existing lunar and terrestrial data, sheds light on the role asteroid collisions played in the evolution of the uppermost layers of the early Earth during the geologic eon called the “Hadean” (approximately 4 to 4.5 billion years ago). 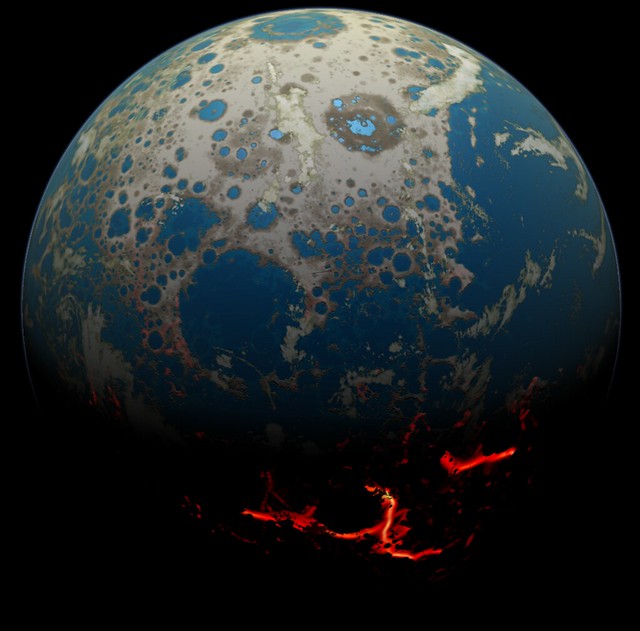 Earth formed about 4.5 billion years ago. The first 500 million years of its life are known as the Hadean Eon. Although this time amounts to more than 10 percent of Earth’s history, little is known about it, since few rocks are known that are older than 3.8 billion years old.

For much of the Hadean, Earth and its sister worlds in the inner solar system were pummeled with an extraordinary number of cosmic impacts.

“It was thought that because of these asteroids and comets flying around colliding with Earth, conditions on early Earth may have been hellish,” said lead study author Simone Marchi, a planetary scientist at the Southwest Research Institute in Boulder, Colorado.

“The new picture of the Hadean Earth emerging from this work has important implications for its habitability,” added Marchi, who is also senior researcher at NASA’s Solar System Exploration Research Virtual Institute.

A model of how craters were distributed, and their relative size, on the early Earth. The circle shows the size of the impact, while the colors show when they hit our planet. Credit: Simone Marchi/SwRI

During that time, the lag between major collisions was long enough to allow intervals of more clement conditions, at least on a local scale,” said Marchi.

“Any life emerging during the Hadean eon likely needed to be resistant to high temperatures, and could have survived such a violent period in Earth’s history by thriving in niches deep underground or in the ocean’s crust.”

The research was an international effort led by Marchi and William Bottke from the Southwest Research Institute in Boulder; Linda Elkins-Tanton from Carnegie Institution for Science in Washington; Michael Bierhaus and Kai Wünnemann from the Museum fur Naturkunde in Berlin, Germany; Alessandro Morbidelli from Observatoire de la Côte d’Azur in Nice, France, and David Kring from the Universities Space Research Association and Lunar and Planetary Institute in Houston.

The research was supported in part by SSERVI, a virtual institute that, with international partnerships, brings science and exploration researchers together in a collaborative virtual setting.