In January 2005, Mike Brown announced the discovery of another object from the Kuiper belt, even larger than Pluto. This dwarf planet (plutoid) provisionally named 2003 UB313 or Xena, was recently officially called, Eris.

The new planet has a diameter of about 2,326 km -the last measurement 2011- and it’s 200 km larger than Pluto. These results were obtained using the Hubble Telescope, after that, the Spitzer Space Telescope confirmed it later.

The previous observations were made using a highly sensitive sensor on the IRAM 30-m telescope that measured the heat emitted by the object. It has been discovered that Eris have the same temperature as Pluto. Eris is a significant object because it is known as the largest KBO (Kuiper belt objects) in the Solar System. 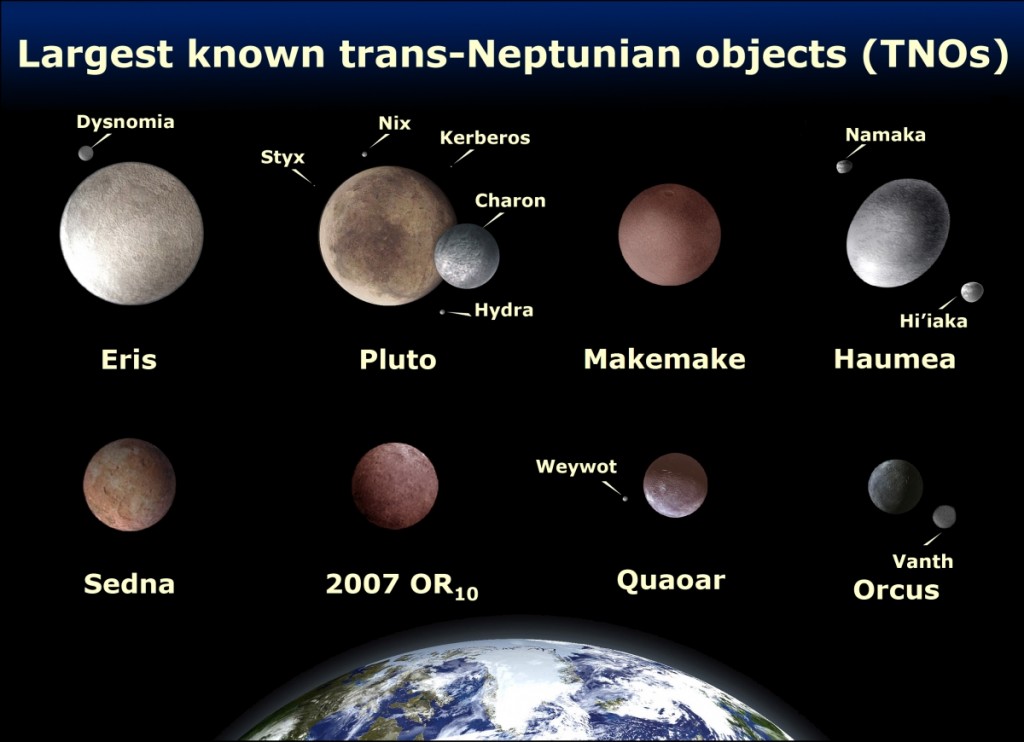 The new dwarf planet Eris is the most distant object orbiting the Sun, being even further than Sedna, another KBO discovered in 2003, lies at 10 billion kilometers from the sun. Eris has one satellite, the only one found so far, called Dysnomia.

The planet has an orbital period of about 557 years and as of 2011 lies at 96.6 AUs (astronomical units) from the Sun, almost its maximum possible distance (its aphelion is 97.5 AU) besides comets. Currently, the dwarf planet has an apparent magnitude of 18.7, which can be detected by through particular amateur telescopes. 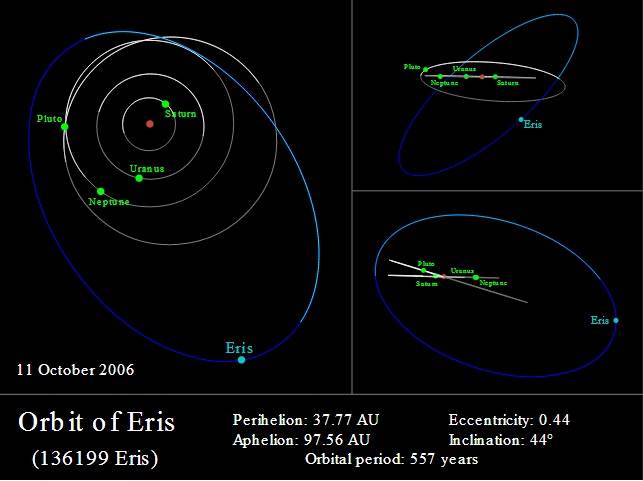 The orbit of Eris (blue) compared to those of Saturn, Uranus, Neptune, and Pluto (white/grey). The arcs below the ecliptic are plotted in darker colours, and the red dot is the Sun. The diagram on the left is a polar view whereas the diagrams on the right are different views from the ecliptic.

Note: 136199 Eris was named after the Greek goddess of chaos. It’s officially named on September 13, 2006 after a long debate, in which the object was known as 2003 UB313 given automatically (meaning that is the 7827 asteroid discovered in the second half of October of the year 2003). Eris was initially nicknamed “Xena” after a heroine from a U.S TV show and it’s moon nicknamed “Gabrielle” after another character from the same series. Number 136199 refers to its position in the list of minor planets.