The Year 2015 will be an exciting year for stargazers. Also, the astronomy calendar containing dates for most notable celestial events happening in 2015, including moon phases, meteor showers, eclipses, oppositions, conjunctions and other interesting events could help enthusiasts know when they will occur.


More…
Orange Dwarf Star may Visit Our Solar System — Will it be Our Nemesis?
Mathematician Found a New and Cheaper Way to Reach Mars Safely
This weekend sees the first display of shooting stars as the Quadrantids meteor shower takes centre stage on Saturday night/Sunday morning (3rd/4th January). Watching for bright meteors is a very popular activity for stargazers as no expensive or complicated equipment is needed to enjoy a meteor shower and like a solar or lunar eclipse, it’s fun to enjoy the spectacle with other observers.

Under very good observing conditions from dark sky locations the Quadrantids, their radiant lying in northern Boötes, can produce up to a couple of meteors a minute and initial indications for the UK is for a favourable weather forecast for a frosty night, with some substantial gaps in any cloud cover at the very least. 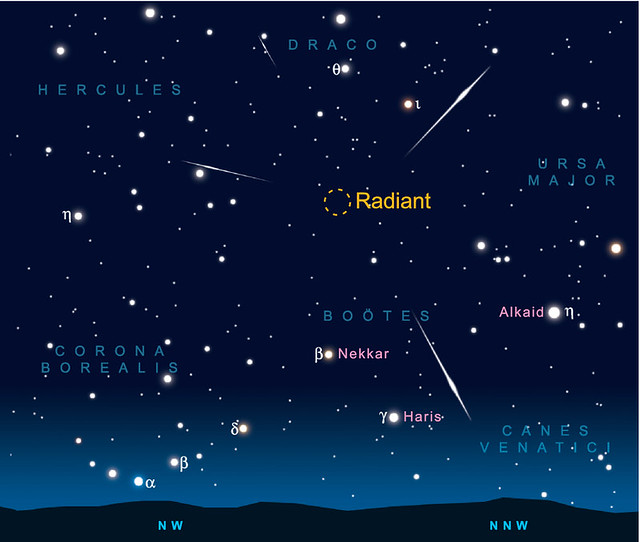 The Quadrantid meteor shower hits its maximum on the night of 3rd/4th January. AN graphic by Greg Smye-Rumsby (click to zoom)

Adolphe Quetelet of the Brussels Observatory discovered the shower in the 1830s, and shortly afterward it was noted by several other astronomers in Europe and America.

Although the Quadrantids can produce over 100 meteors per hour, the sharp peak of this shower tends to last only a few hours, and doesn’t always come at an opportune time. In other words, you have to be in the right spot on Earth to view this meteor shower in all its splendor.

The radiant point is in the part of the sky that used to be considered the constellation Quadrans Muralis the Mural Quadrant. You’ll find this radiant near the famous Big Dipper asterism, in the north-northeastern sky after midnight and highest up before dawn. Because the radiant is fairly far to the north on the sky’s dome, meteor numbers will be greater in the Northern Hemisphere.

However, the Moon will be high in the sky, away from the horizon where most of the meteors will be seen during its peak. Looking before its peak, near dawn on the nights of January 3 or January 4, 2015, will be the best time to avoid the Moon, which will still be below the horizon.
Did
You
Know

The origin of the Quadrantids remains unclear, but scientist said the meteor shower is most likely debris from Comet 2003 EH1.