Debates on God and the Creation of the Universe

The most profound question someone can ask is, “Who am I?” or “Where did I come from?” or “What am I doing here?” Why do human beings like believing that something exists, instead of nothing? Scholars argue that this is because something exists which provides the reason for its existence. Some of history’s best minds, scientists and philosophers, have tried to delve into the mysteries of the origin of the universe.


More…
Is Time Travel Possible?
5 Extreme Alien Weather
Cosmic Universe or Brahmanda: The Rig Veda, which was composed around the 15th – 12th century BCE, describes the an oscillating universe in which a cosmic egg that contains the sun, moon, planets and the whole of space expands out of a single concentrated point which is known as a Bindu before collapsing again.

The universe constantly oscillates between expansion and collapse.

Aristotelian Universe: In the 4th century BCE, Aristotle propagated the theory of a geocentric universe with the spherical earth at the center.

It is surrounded by the concentric spheres of the stars and planets. Aristotle argues that that universe has a fixed size, but stressed the fact that it stays unchanged through posterity.

The focus was on the 4 elements – Fire, Earth, Air and Water which are influenced by the forces of gravity and levity. Gravity stands for the tendency of Earth and Water to sink, whereas levity is the affinity of fire and Air to Rise.
Follow @CosmosUp
Heliocentric Universe: Aristarchus of Samos, the 3rd century BCE Greek astronomer offered an explicit argument of a heliocentric solar system, placing the sun and not the earth at the center of the universe.

He suggested that the earth rotates annually around the sun in a circular orbit with a sphere of fixed stars. Aristarchus’s ideas were rejected in favor of Ptolemy and Aristotle, until it was revived by Copernicus 1800 years later.

Ptolemaic Universe: In the 2nd century AD, the Roman Egyptian astronomer and mathematician Ptolemy pioneered a geocentric model which was based largely on Aristotle’s ideas.

He suggested that the planets and the rest of the universe revolve around a stationary earth in circular motion. This was the most efficient astrophysical ideal of all time. 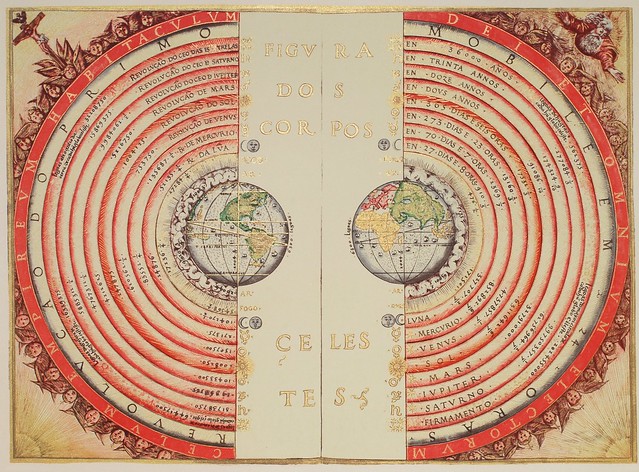 He demonstrated that the movements of celestial objects can be explained without putting the earth to rest in the center.

This was hailed as a landmark finding and is also known as the Copernican Revolution.

The Copernican Principle, which ejected the earth from enjoying the central position, helped establish cosmology as a science rather than as a wing of metaphysics.

Subsequent theories have been forwarded about the origin of the universe down the ages. Astronomers today theorize that 99% of the matter in the universe is invisible. This dark matter is made of components that are difficult to detect.

However, the most popular theory about the origin of the universe is the Big Bang Theory which suggests that the universe originated out of a cosmic cataclysm unparalleled in the whole of history.

On the basis of scientific confirmation and philosophical argument, it can be concluded that the universe has a cause for its existence, though it is difficult to weigh one against the other.

So, how do you think the universe was created?