A new dramatic pics, the closest pics yet of the dwarf planet Ceres, sent by NASA’ Dawn spacecraft last week, show several features of the small world in unprecedented detail, including tall, conical mountain — a ‘pyramid on Ceres’, as it called by scientists — as well as wide cylindrical depressions and even some large craters.

The most amazing feature, which is also attracted much interest from scientists, is the tall, conical mountain, 6000m high roughly the same as Mount McKinley in Alaska, located in the southern hemisphere, and is noted to have a highly reflective surface.

It’s unusual that it’s not associated with a crater,

Why is it sitting in the middle of nowhere? We don’t know yet, but we may find out with closer observations.

Indeed, the land formation is not part of any mountain range. It has a very sharply defined ridged base with almost no accumulated debris.

In its current orbital altitude, flying about 1,470 km (915 miles) from the surface of Ceres, Dawn spacecraft takes 11 days to capture and return images of Ceres’ whole surface. Each 11-day cycle consists of 14 orbits. During the next two months, Dawn will map the entirety of Ceres six times.

Dawn is performing flawlessly in this new orbit as it conducts its ambitious exploration. The spacecraft’s view is now three times as sharp as in its previous mapping orbit, revealing exciting new details of this intriguing dwarf planet, 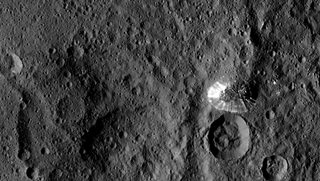 Currently, Dawn spacecraft uses its advanced framing camera to map Ceres’s surface, which allows scientists to create a 3D modeling of its surface. Each image from this orbit has a resolution of 450 ft. (140 m) per pixel, equivalent to 1% planet’s surface area, though, an impressively granular resolution.

Also, Dawn’ visible and infrared mapping spectrometer is collecting data that will give scientists a better understanding of the minerals found on Ceres’ surface, NASA reported.

The science and engineering teams are also taking a look at the data coming in from radio signals to help with measurements of Ceres’ gravity field. These radio data data will help mission planners design the maneuvers for lowering Dawn’s orbit even more.

In late October, the spacecraft will conclude its Ceres mission with a final orbit of the dwarf planet, which will be at an altitude of 230 miles (375 km). It will capture the highest resolution photos yet.

Featured image: ©ShootingStarLogBook.
© Content from this site must be hyperlinked when used.