This week, unexpected new results from NASA’s Hubble Space Telescope shows that the galaxies are accelerating 9% faster away from each other than previously anticipated, astronomers are not quite sure why!

The international team of astronomers, led by Nobel Laureate Adam Riess, measured with unprecedented accuracy the movements of 2,400 Cepheid stars and 300 Type Ia supernovas in 19 galaxies, far beyond our Milky Way galaxies, and found that the rate of expansion of our universe (the so-called “Hubble constant”) is approximately 73.2 kilometers per second per megaparsec (1 megaparsec is equivalent to 3.26 million light-years.) with an uncertainty of 2.4%.

This rate of expansion is in conflict with studies of radiation left over from Big Bang — some unknown forces are speeding up the expansion of the universe for reasons scientists can’t explain. At this rate, these mysterious forces will make the distances between the objects to double in 9.8 billion years.

This surprising finding may be an important clue to understanding those mysterious parts of the universe that make up 95% of everything and don’t emit light, such as dark energy, dark matter and dark radiation,

You start at two ends, and you expect to meet in the middle if all of your drawings are right and your measurements are right. But now the ends are not quite meeting in the middle and we want to know why.

Its unclear why the universe is expanding so fast but there are some hypotheses. One possible explanation could be the mysterious force known as dark energy, a weird anti-gravity force discovered in 1998 which is hypothesized to contribute 68.3% of the total energy in the present-day observable universe.

Dark energy may be much stronger than scientists had thought and thus pushing galaxies apart from one another more powerfully than originally estimated.

Another explanation for the discrepancy is that dark radiation — subatomic particles, similar to neutrinos, that travel nearly as fast as the speed of light — could be playing a role that hasn’t been taken into account, astronomers said.

Dark radiation, ideally different from dark matter & dark energy, may have changed the balance of energy in the early history of the universe 13.8 billion years ago, more energy from dark radiation boosted the acceleration to today’s expansion rate.

And finally, Einstein’s theory of gravity isn’t quite right when we look at the whole universe, which is really troubling.

How astronomers measured the universe’s expansion rate ©NASA, ESA, A. Feild (STScI), and A. Riess (STScI/JHU)

Either something else is missing, as in there’s a new type of substance we don’t know, or the things we already know of are really weird and crazy and something funny is going on. We either add something new or we really have to figure out what do we think about dark matter and dark energy and what they are, 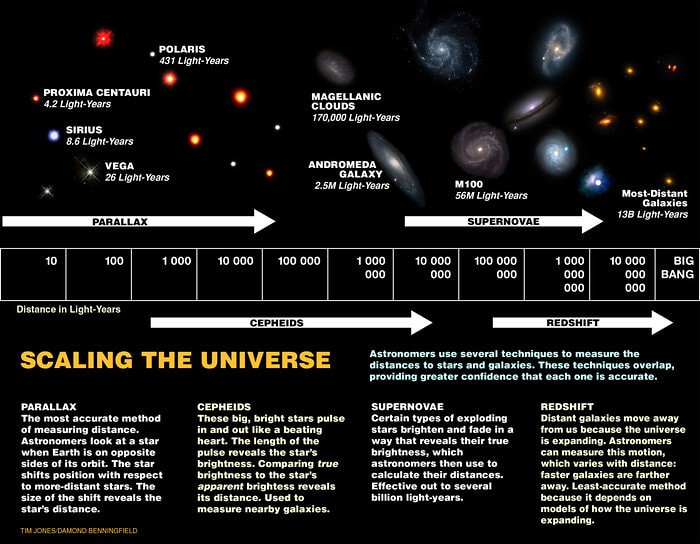 Different technique used by astronomers to calculate distances in the universe ©Hetdex.org
Click to zoom

Future of the Universe

This new result is actually important for many reasons, an expansion universe can give us interesting scenarios for the future of the universe and its ends.

The universe could end in what is known as the Big Rip: the matter of the universe, everything we know and everything else besides, is progressively torn apart at a certain time in the future, vanishing from view, 22 billion years from now.

Alternately, the expansion of the universe will continue forever and thus its turn into a cold universe with no stars and completely empty, this is known as the Big freeze or the Heat Death.

Today we look up in the sky and we see just fantastic things; galaxies, clusters of galaxies stretching out all over the sky,

But if the expansion is going to get faster and faster, eventually those galaxies will get pulled too far away for us to see. Space becomes an ever- less beautiful and rich place. The universe becomes a relatively lonely place.

The truth is that it’s still an open scenario, we certainly don’t know for sure what’s going to happen.

So, in short, there’s a lot of work left to do before astronomers can fully appreciate the meaning of the new results.

We know so little about the dark parts of the universe; it’s important to measure how they push and pull on space over cosmic history,

More research is needed to verify the cause behind these accelerating rate because something is not right, scientists added. The research will be published in upcoming edition of the Astrophysical Journal.