Could There Be Two More Large Planets Beyond Pluto?

There are only 8 planets in the solar system, at least that we know of. The planets are pretty big and we have all these powerful telescopes. So, you’d think we’d know if there is another one around. But, some scientists aren’t so sure! According to at least two teams of researchers, there might be a few more planets beyond Pluto, lurking in the dark depths of space, just waiting to be discovered.

Of course, there are a lot of good scientific reasons that, some astronomers think, it’s unlikely that there are unknown planets out there. For one thing, according to our best current theories, there’s no way that the original disk of material (protoplanetary disc) that formed the 8 planets, could have extended out that far.

We measure distances in the solar system in terms of astronomical units (or AU) — 1 AU = the distance between Earth and the Sun. And our best estimates, right now are: the original disk of planet forming stuff couldn’t have extended more than 100 AU. And that seems to make sense, because we haven’t found any other planets beyond that.

NASA’ space-based WISE Telescope, which spends its time scanning the farthest reaches of the solar system, has already determined that there aren’t any objects larger than Jupiter within 26,000 AU of the Sun and nothing larger than the Saturn within 10,000 AU. But WISE is only designed to detect the hotter gas giants. So, there could be other smaller, rocky worlds, that we just haven’t detected yet.

In March 2014, for example, scientists announced that they discovered a dwarf planet-sized object orbiting the Sun, called 2012 VP113 (BIDEN) out beyond the Kuiper Belt.

Nicknamed Biden, it makes its closest approach to the Sun — also known as its perihelion — about 88 AU away. That was new to astronomers, because unlike some other kinds of objects, such as comets which swing by really close every once in a while, Biden has the most distant perihelion of any object in the solar system.

That means that, its closest approach to the Sun is farther out there than the perihelion of any other body around, at least that we know of. But, its distance wasn’t the only reason the object seemed weird. An orbit is usually just a flat, elliptical path around the Sun, and most of the planets orbits, approximately, in the same plane of the solar system. But Biden’s orbit is tilted slightly above and below that plane and its perihelion happened to occur right where it’s path starts to rise above it.

That, in itself, might not be such a big deal except that almost every other known asteroid, whose orbits are so far away, do the very same thing, reaching perihelion right where they cross the plane of the solar system. And according to researchers, the best way to explain all those perihelion lining up is that: a big, distant planet is affecting those orbits. Specifically, they say that, undiscovered plant, at least ten times the size of Earth, quietly orbiting the Sun at a distance of 250 AU could be affecting the orbits of asteroids between thirty and 158 AU. 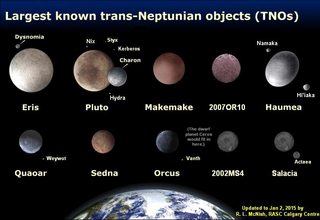 This excess of objects with unexpected orbital parameters makes us believe that some invisible forces are altering the distribution of the orbital elements of the ETNOs (extreme trans-Neptunian objects), and we consider that the most probable explanation is that other unknown planets exist beyond Neptune and Pluto,

Find it hard to believe that something that big can be out there that we have never seen? Well, in 2014 two Spanish physicists concluded that there might actually be two new planets out there!

They looked at 13 known asteroid, orbiting way out in the same general region. The monitored the orbit of these objects and their findings matched what the earlier study had predicted — all 13 of them behaved like there was an unknown planet orbiting the Sun at 250 AU. But, they also noticed that, five of the asteroids had orbits that were similar in another weird way.

One pair of asteroids was taking almost exactly the same amount of time to orbit the Sun and the other three were all taken precisely two-thirds that time. And that would make sense that, these asteroids orbits were being affected by yet another unknown planet.

The exact number is uncertain, given that the data that we have is limited, but our calculations suggest that there are at least two planets, and probably more, within the confines of our solar system,

This still hypothetical world, the team says, would be about 200 AU from the Sun and would have a mass bigger than Mars but less than Saturn. So, if the math is suggesting where these planets might be, why haven’t we found them yet?

Well, if they exist, they’re, most likely, distant, dark and slow with such large orbits that, definitely, be hard to spot. And, there could be some other reason why the perihelion of all these asteroids lineup, or why those five had such funky orbits.

If it is confirmed, our results may be truly revolutionary for astronomy

Astronomers will get a big boost in their search for any other Earth long-lost planetary siblings when the new Large Synoptic Survey Telescope in Chile, comes online in the early 2020. It designed to look for dim, faraway objects within our solar system. So the hope is that, if there are any more planets out there to be found, this telescope will find them. So, for all you people who think there are nine planets in the solar system, maybe you are right, maybe there were more than that. Who knows what the future holds!