There’s growing evidence that Earth may be headed for a mass extinction, where over 75 percent of all species die out and the world is changed forever. There’s also evidence that humans would survive such an event — for better or for worse. Here’s why.

Over the past half-billion years, life on Earth suffered through five mass extinctions, where the majority of species on the planet died off and a whole new set of ecosystems rose up to replace them.

Most of us have heard about the most recent catastrophe like this, when an asteroid hit the planet and, along with some ferociously large volcanoes in India, managed to wipe out almost the entire dinosaur population 65 million years ago.

Instead of a world of dinosaurs, we now live in a world dominated by furry mammals like ourselves. Below, you can see a timeline of Earth’s previous mass extinctions. 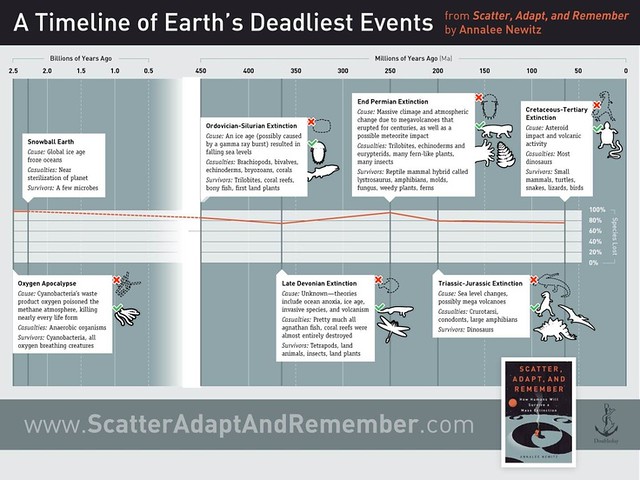 So why do I have the audacity to claim that humans could survive events like these? I’ve been thinking about this question a lot over the past few years. Quite simply, there’s a solid body of evidence that suggests Homo sapiens has the characteristics of a mass extinction survivor species.

As geologist and mass extinction expert Mike Benton put it, the animals who make it through planetary disasters tend to be adaptable and live at high population sizes — just like humans.

Whatever our flaws, you can’t accuse us of having a small population. Nor can you say that we don’t know how to adapt to pretty much any crazy environment on Earth — as well as environments in space, beneath the ground, and under the water.

Indeed, our incredible adaptability puts us in league with some of the planet’s greatest survivor species, like cyanobacteria (blue-green algae) and sharks. Both species survived more than one mass extinction, and they did it by basically being willing to live anywhere and eat whatever crap they could. Which — again, just like humans. 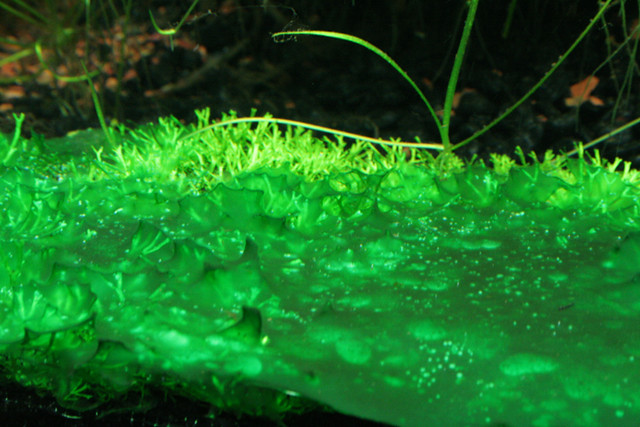 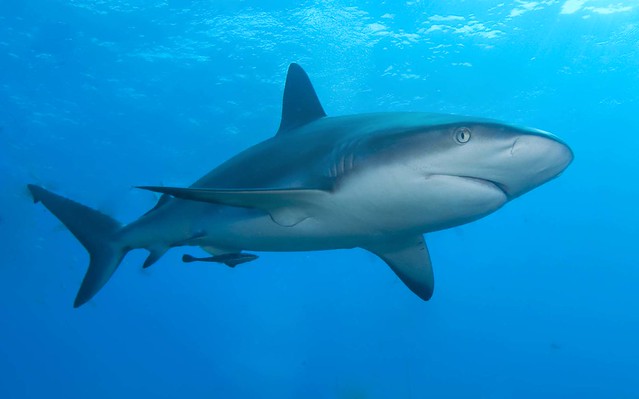 But here’s what humans have that sharks and algae don’t. We are able to learn from the past, including the deep geological past of our planet, and we’re able to plan for the future. For example, geologists and paleontologists know that most of the previous mass extinctions on the planet were caused by climate change.

Volcanoes or asteroids ripped the planet apart, loading the atmosphere with carbon and other poisons. The oceans went acidic and the climate got so hot that lots of species died out.

At other times, sudden ice ages gripped the planet, locking once-temperate regions like Antarctica into massive blocks of ice.

Unlike sharks, humans are in a position to understand the dangers that await us if the climate changes too much. And, even better, we can do something about it.

Already, scientists and governments are putting money and time into developing forms of energy that don’t load the environment with carbon. On a smaller scale, municipalities are trying to become more efficient.

But, you might be saying, humans are also polluting the environment in unprecedented ways. We’re driving many life forms extinct. Plus, we’re getting more efficient at killing each other every year, either directly in war or indirectly during famines. Do we really deserve to survive?