More than 12.5 billion light-years away is a galactic powerhouse, a galaxy that is producing stars at nearly 1,000 times fasters than our own Milky Way.

Now, scientists have found that this starburst galaxy, known as AzTEC-3, together with its gang of calmer galaxies may just represent the best evidence yet that large galaxies grow from the merger of smaller ones in the early universe.

This dramatic scene has been observed by the powerful ALMA observatory located in Chile’s high altitude Atacama Desert.

“The ALMA data reveal that AzTEC-3 is a very compact, highly disturbed galaxy that is bursting with new stars at close to its theoretically predicted maximum limit and is surrounded by a population of more normal, but also actively star-forming galaxies,” said Dominik Riechers, an astronomer and assistant professor at Cornell University in Ithaca, New York.

“This particular grouping of galaxies represents an important milestone in the evolution of our Universe: the formation of a galaxy cluster and the early assemblage of large, mature galaxies.”

This study provides the best evidence yet that large galaxies grow from the merger of smaller ones in the early Universe, a process known as hierarchical merging. 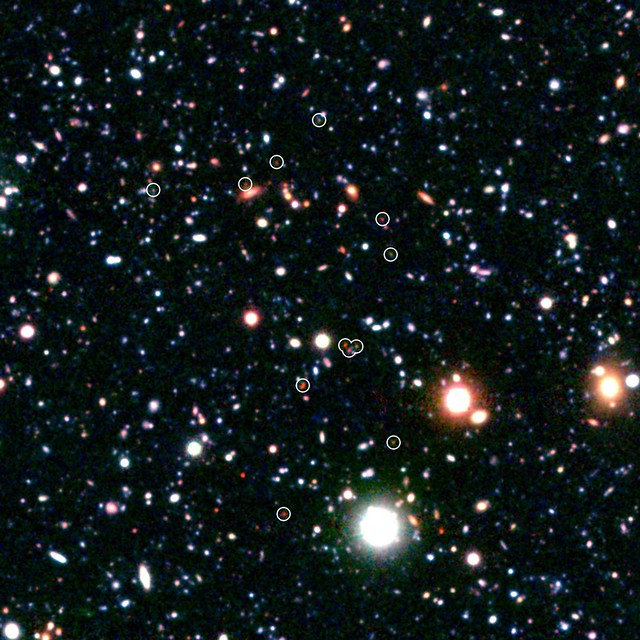 The growing galactic metropolis, named COSMOS-AzTEC3, is the most distant known massive “proto-cluster” of galaxies, lying about 12.6 billion light-years away from Earth. (Source: Nasa website) (click to zoom)

Evidence for this hierarchical model of galaxy evolution has been mounting, but these latest ALMA data show a strikingly clear picture of the all-important first steps along this process when the Universe was only 8 percent of its current age.

“One of the primary science goals of ALMA is the detection and detailed study of galaxies throughout cosmic time,” said Chris Carilli, an astronomer with the National Radio Astronomy Observatory in Socorro, New Mexico.

“These new observations help us put the pieces together by showing the first steps of a galaxy merger in the early Universe.”

“AzTEC-3 is currently undergoing an extreme, but short-lived event,” said Riechers. “This is perhaps the most violent phase in its evolution, leading to a star formation activity level that is very rare at its cosmic epoch.”

The astronomers believe that AzTEC-3 and the other nearby galaxies appear to be part of the same system, but are not yet gravitationally bound into a clearly defined cluster. This is why the astronomers refer to them collectively as a protocluster.