A recent poll brings bad news for those who trust in scientific consensus: a majority of adults in the United States are not convinced that the universe began with the Big Bang according to a new Associated Press poll.

When considering concepts scientists consider truths, Americans have more skepticism than confidence in those that are farther away from our bodies in scope and time: global warming, the age of the Earth and evolution and especially the Big Bang from 13.8 billion years ago.

“Science ignorance is pervasive in our society,” said 2013 Nobel Prize in medicine winner Randy Schekman of the University of California at Berkeley, “and these attitudes are reinforced when some of our leaders are openly antagonistic to established facts.”

Schekman was quoted in a press release announcing the AP-GfK poll [PDF], which surveyed 1,012 American adults 18 or older in late March, and reports a margin of error of plus or minus 3.4 per cent at a 95 per cent confidence level.

The Big Bang theory was a hotly debated issue among Americans, with 51% of those polled not accepting it as fact.(click to zoom)

The Associated Press poll found:Only 4% of Americans doubt that smoking causes cancer.
And only 6% question whether mental illness is a medical condition that affects the brain.
The vast majority accept that we carry genetic codes inside our cells. Only 8% quibble with that finding.
Far more people — 15% — question the safety of childhood vaccines, the AP poll revealed.
About four in 10 Americans are unsure or don’t believe in global warming.
The same ratio eschews the commonly accepted scientific belief that the Earth is billions of years old and that life was formed through a process of natural selection.
But the biggest group of doubters — 51% — clustered around the Big Bang theory.
A narrow majority of Americans question the idea that the universe originated sometime between 10 billion and 20 billion years ago from a massive explosion. 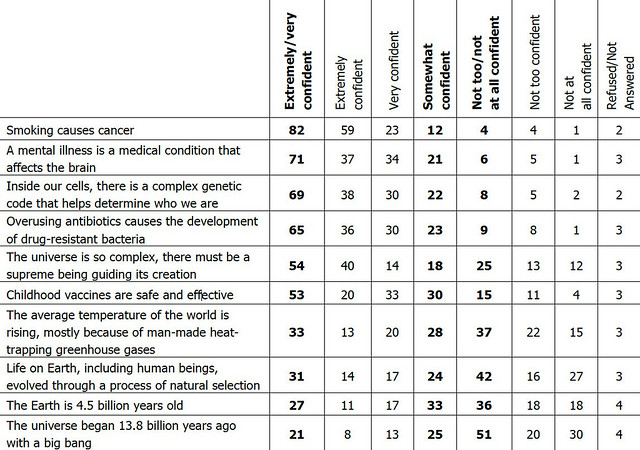 Few Americans doubt that smoking causes cancer. Big Bang? Not so much (click to enlarge)

As might have been predicted, “Political values were closely tied to views on science in the poll,” the AP-GfK reports, “with Democrats more apt than Republicans to express confidence in evolution, the Big Bang, the age of the Earth and climate change.”

Religious beliefs also correlate with attitudes towards scientific consensus. The more firm a respondent’s belief in a supreme being, the poll reports, the less likely they are to have confidence in evolution, the Big Bang, the age of the Earth, and human-influenced climate change.

Unsurprisingly, the poll found that “those who regularly attend religious services or are evangelical Christians express much greater doubts about scientific concepts they may see as contradictory to their faith.”

“It makes sense now that science would have made no headway because faith is untestable,” he told the AP.