Now We Know What is Beneath Jupiter Clouds

People have been captivated by the mighty gas giant Jupiter for centuries, with its powerful swirling clouds and the iconic glowering red eye… really interesting, but we’ve no idea what lies beneath those colorful cloud layers, until now!

Just a month before the imminent visit of NASA’ Juno spacecraft to the gas giant (set on July 4, 2016), astronomers manage to cut through Jupiter clouds and revealing what’s happening down below.

By using the new upgraded version of the Very Large Array (VLA) radio telescope in New Mexico, researchers have produced radio maps of planet’s thick clouds down to 60 miles (100 km) depth in unprecedented detail, and finding patterns of poisonous ammonia-rich gasses just beneath.

We in essence created a 3D picture of ammonia gas in Jupiter’s atmosphere, which reveals upward and downward motions within the turbulent atmosphere,

Previous Jupiter’ radio maps have been limited to analyzing its properties at specific latitudes, however those new maps reveal more details about atmosphere’s temperature, pressure and gas motions.

What really excites me is just the level of detail we see,

In our maps you can see different zones, turbulent features, vortices – even the Great Red Spot. This has all been made possible by an upgrade to the VLA and a new technique developed by one of our co-workers.

Thermal radio emissions of the planet are partially absorbed by ammonia gas. Based on the amount of absorption, researchers could determine how much ammonia is present and at what depth.

Astronomers saw that ammonium-rich gases rising to form a toxic ammonium hydrosulphide cloud at -100°F (-73°C) and a cloud of ammonia-ice crystals at -148°F (-100°C). These clouds are easily seen from Earth by optical telescopes. 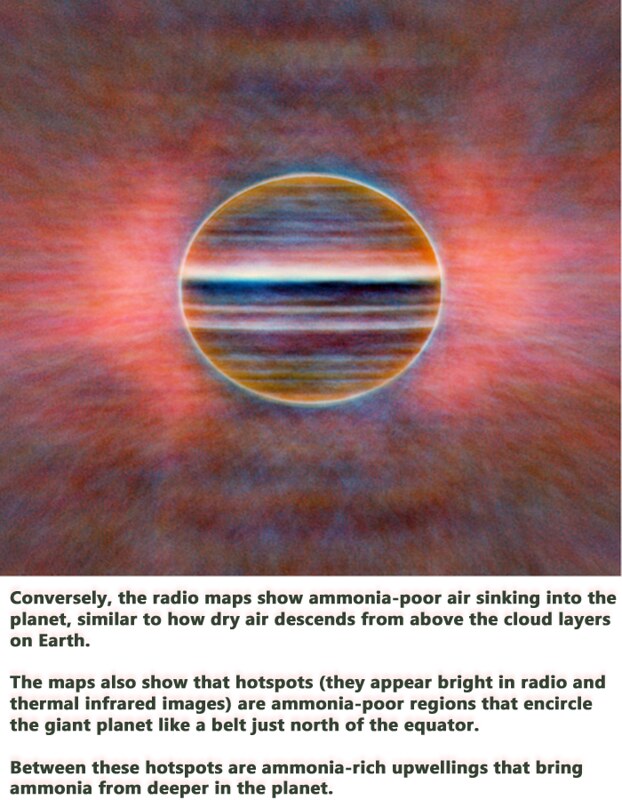 With radio, we can peer through the clouds and see that those hotspots are interleaved with plumes of ammonia rising from deep in the planet, tracing the vertical undulations of an equatorial wave system,

We now see high ammonia levels like those detected by Galileo from over 60 miles (100 km) deep, where the pressure is about eight times Earth’s atmospheric pressure, all the way up to the cloud condensation levels,