Astronomers Think They Have Found Alien Megastructures 1400 Light Years Away

The search for extraterrestrial civilizations goes through ups and downs in recent weeks. While early September, a study claimed that no sign of advanced alien civilizations was observed in the nearby universe, here, today’ observations conducted on a distant star generate some questions.

According to a classification established by Russian astrophysicist Nikolai Kardashev, a civilizations can be cataloged (how much usable energy it has at its disposal) into three main types, :

A Type I designation is given to a civilization that had managed to collect all of the energy available on its planet. Our civilization is almost at that level, although we would need to boost our current energy production over 100,000 times to reach this status.

Type II is a civilization that could harness the power of their entire star.

Type III, finally, is that of a civilization that collects energy at the scale of a galaxy, resulting in them becoming a master race.

Professor Michael Garrett, of the Leiden Observatory (Netherlands) was interested in the type III civilizations on the scale Kardashev, and tried to detect their signs. According to him, advanced civilizations capable of collecting galactic energy should emit enough heat (resulting from energy consumption) to be detectable in thermal infrared radiation.

By observing a sample of a hundred galaxies with such emissions, astrophysicist concluded that the vast majority of these systems present emission that is best explained by natural astrophysical processes — the emissions were originated due to dust, including those regions rich in star formation. The conclusion of Michael Garrett?

The original research at Penn State has already told us that such systems are very rare but the new analysis suggests that this is probably an understatement, and that advanced Kardashev Type III civilisations basically don’t exist in the local Universe. In my view, it means we can all sleep safely in our beds tonight – an alien invasion doesn’t seem at all likely!

More seriously, he found “a little disturbing” that these super-civilizations seem not to exist.

It’s a bit worrying that Type III civilisations don’t seem to exist. It’s not what we would predict from the physical laws that explain so well the rest of the physical universe. We’re missing an important part of the jigsaw puzzle here. Perhaps advanced civilisations are so energy efficient that they produce very low waste heat emission products – our current understanding of physics makes that a difficult thing to do. What’s important is to keep on searching for the signatures of extra-terrestrial intelligence until we fully understand just what is going on.

According to the results of his work published in the September issue of the journal Astronomy and Astrophysics, super-galactic civilizations would be well conspicuously absent. 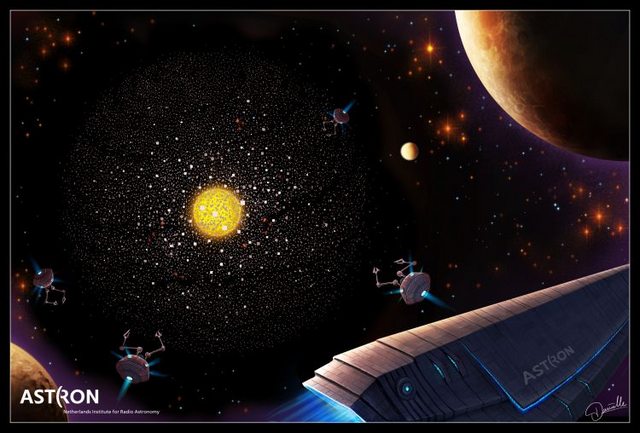 Artistic illustration of a galactic civilization, a master race that collect all gallaxy’ energy. ©Astron.
Click to zoom

If there is no type III civilizations in the area, what about those of type II? Perhaps, we have found an answer thanks to Kepler exoplanet hunter.

KIC 8462852, 1480 light years away from us, located between the constellations Cygnus and Lyra, is a yellow-white star somewhat more massive, hotter, and brighter than the Sun. It is part of the stars studied by the Kepler Space Telescope in his quest for exoplanets. By focusing on the data collected during this observation, a group of amateur astronomers, using Planet Hunter’s website, noticed some dips in the light of KIC 8462852 but they aren’t periodic.

Such ‘falls’ are often clues of an exoplanet passes in front of its star (transit). But in the case of KIC 8462852, the dips aren’t periodic and one dropped the amount of starlight by 15%, and another by a whopping 22%!

It was really weird. We thought it might be bad data or movement on the spacecraft, but everything checked out. 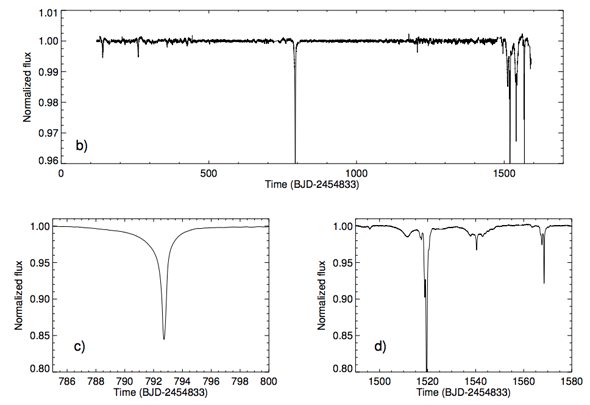 Huge dips in brightness, up to 22 percent in the star.©Graphs by Boyajian et al.
Click to zoom

Straight away, we know we’re not dealing with a planet here. Even a Jupiter-sized planet only blocks roughly 1 percent of this kind of star’s light, and that’s about as big as a planet gets. It can’t be due to a star, either; we’d see it if it were. And the lack of a regular, repeating signal belies both of these as well. Whatever is blocking the star is big, though, up to half the width of the star itself!

It was pretty amazing that these data are real,

We went through a dozen scenarios at least, pretty much everything we could think of, even if it only slightly related to something that could look like this star,

It’s not something in the telescope or the processing; the dips are real. It’s not due to starspots (like sunspots, but on another star). My first thought was some sort of planetary collision, like the impact that created the Moon out of the Earth billions of years ago; that would create a lot of debris and dust clouds. These chunks and clouds orbiting the star would then cause a series of transits that could reproduce what’s seen.

The problem with that is that there’s no excess of infrared light from the star. Dust created in such impacts warms up and glows in the IR. We know how much IR stars like KIC 8462852 give off, and we see just the right amount from it, no more. The lack of that glow means no (or very little) dust.

The most “compelling” hypothesis is that another star passed through the strange star’s system, disturbing star’s Oort cloud (a region billions of kilometers out where we think most (if not all) stars have billions of icy objects) causing the icy chunks flying down toward the star, where they could break up, which could have caused the strange light pattern.

And, as it happens, there is another star pretty close to KIC 8462852; a small red dwarf about 130 billion kilometers out. That’s close enough to affect the Oort cloud.

This doesn’t close the case, though. Comets are a good guess, but it’s hard to imagine a scenario where they could completely block 22 percent of the light from a star; that’s a huge amount. Really huge.

Scientists admit that further observations are needed, and Kepler has since undergone a few incidents that do not make it capable of performing this task.

According to The Atlantic, Tabetha Boyajian said: Her recent paper only reviews “natural” scenarios. “But,” she said, there were “other scenarios” she was considering.

The site also cites Jason Wright of the University of Penn, who is expected to publish an alternative explanation … which refers to a “swarm of megastructures,” — Alien Megastructures — perhaps a kind of giant solar panels to capture energy from the star.

This idea evolved into what’s called a Dyson Sphere, a gigantic sphere that completely encloses a star. It was popular back in the 1970s and 80s

When [Boyajian] showed me the data, I was fascinated by how crazy it looked,”

Aliens should always be the very last hypothesis you consider, but this looked like something you would expect an alien civilization to build.

According to The Atlantic, Wright, Boyajian and SETI (organization specializing in the search for extraterrestrial life) consider pointing a large radio dish in the direction of KIC 8462852, to see if they can detect radio waves at frequencies associated with technological activity. If they see a sizable amount of radio waves, they’ll follow up with the Very Large Array (VLA) in New Mexico.

If we saw something exciting, we could ask the director for special allotted time on the VLA,

And in that case, we’d be asking to go on right away.

So, what do you think? Aliens constructing huge megastructures or it’s a more natural scenario?