Using the Atacama Large Millimeter Array (ALMA) located in the Atacama desert of northern Chile, astronomers were surprised to discover evidence that could point to a massive new planet X at the edge of our own solar system. Given this startling revelation, scientists now concentrated all their efforts to identify the object whose nature remains completely unknown for now!

Although we thought to know everything about the configuration of our solar system, however it seems that we still have to unlock some secrets. Indeed, by using the ALMA radio telescopes in Chile, two independent teams of scientists spotted undetected object lurking on the furthest edge of our solar system.

But in separate pairs of snapshots — taken over a period of months — respectively July 7, 2014 and May 2, 2015, astronomers noticed that the object in question seemed to move swiftly against the ‘fixed’ background stars. Given this observation, scientists have concluded that the celestial body was much closer to Earth than was previously thought. The authors say the object is not also a star, such a star would have been bright enough to be seen before. It is also not likely to be part of Alpha Centauri star system, rather astronomers believe the mysterious object is somewhere between 10 billion and 2 trillion miles from Earth.

Until the nature of the source becomes clear, we have named it Gna,

write the authors in the study.

Unless there are yet unknown, but significant, issues with ALMA observations, we have detected a previously unknown objects in our solar system.

We argue that the object is most likely part of the solar system… albeit at a distance too far to be detectable at other wavelengths. 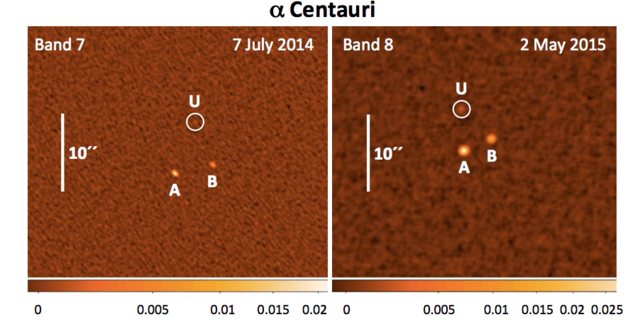 Moving object near Alpha Centauri star system. It’s labeled as U in the image.

An important debate is now raging within the scientific community about the nature of this object. Different kinds of space object could explain the light source. Among the most widely discussed theories:

And as astronomer Phil Plait pointed out in a Slate blog post:

Even if real, these objects might not be part of our solar system at all. Maybe they’re (each) actually two separate, distant galaxies, both of which change brightness over time so one brightened while the other faded. I know, that’s a reach, but it shows there could be other explanations.

The only way to know for sure is to gather more observations. Either by tracking its motion or by gathering observations at other wavelengths we can eventually get a handle on its size and distance,

Whether dwarf planet, super-Earth or small star, it seems clear that something is lurking on the outer edge of our solar system.

Meanwhile, astronomers will continue to study the object with extra instruments in the hope of, some day, they’ll identify it. Whether its planet X or not we will see.