It’s a small point in the constellation Ursa Major but if we could cross the 250 light-years that separate us from it, we would observe a rare spectacle: a quintuple star system (five stars) containing two eclipsing binary stars — it is the first known system of its kind.

If double or even triple stars are common in the galaxy, this one though is very rare, a truly exotic star system. This particular system has no name, just a possible designation to remember: 1SWASP J093010.78+533859.5 (J093010 for short) indicating that it is part of the objects studied by the program SuperWASP (Wide Angle Search for Planets) project, in the Canary Islands and South Africa, to image almost the whole sky looking for exoplanets.

For now, we have not discovered any planets around these five stars, but this does not mean there’s no one there. Dr Marcus Lohr, of the Open University, lead author of the new finding says:

This is a truly exotic star system. In principle there’s no reason it couldn’t have planets in orbit around each of the pairs of stars. Any inhabitants would have a sky that would put the makers of Star Wars to shame. – there could sometimes be no fewer than five Suns of different brightnesses lighting up the landscape.

Days would have dramatically varying light levels as the different stars were eclipsed. They would though miss out on night for a large part of their ‘year’, only experiencing darkness (and a night sky) when the stars were on the same side of their world.

Currently, we have detected ‘only’ five stars. Yet they are worth seeing! The data collected suggests the existence of a contact eclipsing binary — a system in which the two stars are orbiting so close together that they share an outer atmosphere. This means that the two stars share the same binary plane of revolution, indicating that they are probably formed from a single disk of gas and dust; they were born in the same ‘cradle’.

The first pair consists of two stars rather smaller and cooler than our Sun, separated by a distance of three million kilometers (twice the size of the Sun) with a longer orbital period of 8 hours. The second couple is what we call a contact binary. These two stars have a rotation period of less than 6 hours. 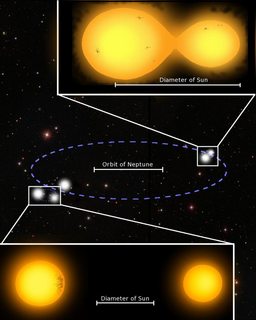 The 2 sets of stars are at 21 billion kilometers from each other, or rather larger than the distance between the Sun and Pluto. However, they are gravitationally bound in a single system, as the fifth star, which is up to 2 billion km away from the first binary, but not apparently producing any additional eclipses.

Although these stars are smaller and cooler than the sun the entire collective system is bright enough to be visible, so amateur astronomers with small telescopes should even be able to observe the eclipses for themselves.

By studying this bizarre and rare system, scientists could better understand how stars and planets, including our small and green ‘ball’, came into being.