Most of these planets are hot gas giants with tight orbits. It was also found planetary systems with ‘super-Earths’ — rocky planets several times the mass of Earth — a type of planet that does not exist in our own solar system. Other systems includes a series of rocky planets (some in habitable zone) followed by a series of more distant gas giant.

Ever since the discovery of the first exoplanet in 1990, astronomers thought they’d quickly find a complex solar systems like our own but after decades of research, we realize that our solar system is unique, as its inner region is populated by rocky, small planet and gas giants are farther out.

So, will we ever find other stars like our sun with planets orbiting it in the same way to what we have here? a mirrors to ours?

A star HIP 11915, as it was named, located 186 light-years away from us in the constellation Cetus is not only looks like our sun but it is also similar in mass and even have the same age. Actually, there’s much more.

Based on the last study on the search for ‘solar system 2.0.’, astronomers think that they have found our potential match. Using the powerful HARPS instrument, they have spotted a Jupiter-like exoplanet orbiting HIP 11915 at almost exactly the same distance as our gas giant Jupiter.

Furthermore, as the composition of HIP 11915 is similar to the Sun’s, scientists believe that there could be rocky planets amybe even an Earth-like planet orbiting it, just like here.

Does this mean that the holy grail of exoplanets have been discovered, the first real “twin” of our solar system? HIP 11915 system would be one of the most promising candidates, “a complete Solar System 2.0,”. 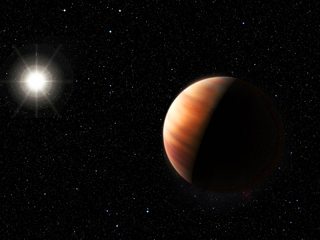 After two decades of hunting for exoplanets, we are finally beginning to see long-period gas giant planets similar to those in our own Solar System thanks to the long-term stability of planet hunting instruments like HARPS,

This discovery is, in every respect, an exciting sign that other solar systems may be out there waiting to be discovered.

Dr Jorge Melendez who is a co-author on the paper, added:

the quest for an Earth 2.0, and for a complete Solar System 2.0, is one of the most exciting endeavors in astronomy. We are thrilled to be part of this cutting-edge research, made possible by the observational facilities provided by ESO.

186 years light, it’s a bit far for a visit, but who knows, maybe soon we’ll be able to detect many solar systems similar to our own with Earth-like planets located in the habitable zone — the ‘right’ distance where liquid water might pool on the planet’s surface.

Follow-up observations are needed to confirm and constrain the finding, but the presence of a Jupiter twin and a solar-like composition both make HIP11915 an excellent prospect for future terrestrial planet searches.