Many people change a lot after their youth… and so to did our Universe. Nowadays, galaxies contain both dust and gas, but back in the early Big-Bang days, the earliest galaxies had no dust, only gas. Now, A team of astronomers, led by Darach Watson, from the University of Copenhagen used the Very Large Telescope‘s X-shooter instrument along with the Atacama Large Millimetre/submillimetre Array (ALMA) to observe one of the youngest and most remote galaxies ever found.

They were surprised to discover a far more evolved system than expected. It had a fraction of dust similar to a very mature galaxy, such as the Milky Way. Such dust is vital to life, because it helps form planets, complex molecules and normal stars.

The target of their observations is called A1689-zD1. Galaxy A1689-zD1 is so distant that you can barely see it in the massive Hubble image down. But it sits behind a massive cluster of galaxies called Abell 1689, which is so big that it acts as a gravitational lens and magnifies the light of A1689-zD1 by over nine times. 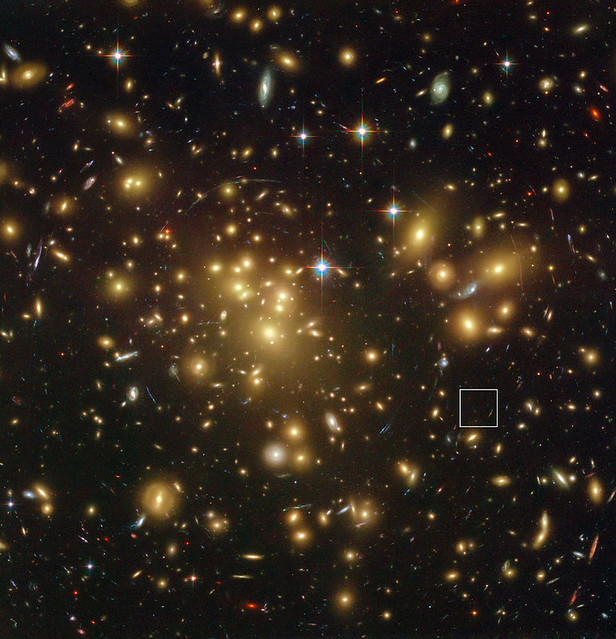 This spectacular view from the NASA/ESA Hubble Space Telescope shows the rich galaxy cluster Abell 1689. The huge concentration of mass bends light coming from more distant objects and can increase their total apparent brightness and make them visible. One such object, A1689-zD1, is located in the box — although it is still so faint that it is barely seen in this picture. New observations with ALMA and ESO’s VLT have revealed that this object is a dusty galaxy seen when the universe was just 700 million years old. Image credit: NASA; ESA; L. Bradley (Johns Hopkins University); R. Bouwens (University of California, Santa Cruz); H. Ford (Johns Hopkins University); and G. Illingworth (University of California, Santa Cruz)
Click to zoom

Most scientific models suggest the universe, in the aftermath of the big bang, consisted of only hydrogen and helium gas — no dust. But A1689-zD1 features lots of dust, a lot more than current theories can explain.

“Although the exact origin of galactic dust remains obscure, our findings indicate that its production occurs very rapidly,” explained Darach Watson, “within only 500 million years of the beginning of star formation in the Universe — a very short cosmological time frame, given that most stars live for billions of years.”

The ratio of cosmic dust-to-gas in A1689-zD1 is what astronomers expect to find among the confines of much older galaxies. The revelation suggests early galaxies may have evolved much more quickly than previously theorized and that this particular galaxy began star formation not long after the birth of the universe.

“This amazingly dusty galaxy seems to have been in a rush to make its first generations of stars. In the future, ALMA will be able to help us to find more galaxies like this, and learn just what makes them so keen to grow up,” Kirsten Knudsen, of Chalmers University of Technology in Sweden, said.

The only way to find out for sure is to uncover more galaxies like A1689-zD1. Unfortunately, they’re extremely difficult to find—and the one other example astronomers have is almost entirely dust free, so it’s impossible to say which type is more common. “We don’t have any other candidates at this point,” says Watson.

With ALMA, completed two years ago, and a new generation of giant optical telescopes now under construction, however, they’re likely to find more of these galaxies before long. The very early universe doesn’t make a lot of sense at the moment—but that’s almost certainly going to change.