By using the Gemini Planet Imager, a team of scientists have discovered a gas-shrouded planet, strikingly similar to a young Jupiter, nearly 100 light years away from Earth in a young star system.

Known as 51 Eridani b, the newly-discovered planet is a young world — only 20 million years old, whereas our own solar system are about 4.5b years old — orbiting the star 51 Eridani at a distance of about 13 AU (equivalent to be between Saturn and Uranus in the solar system). It is about two times the mass of Jupiter, scientists estimate, and has a temperature of 427°C (800 degrees Fahrenheit).

According to the authors of the study, published online in the journal Science, 51 Eridani b could allow astronomers to study the early stages of a planet’s evolution.

This is exactly the kind of planet we envisioned discovering when we designed GPI,

We wanted to find planets when they’re young so we can figure out the formation process.

Travis Barman, who took part in the study said:

51 Eri b is the first young planet that probably looks like Jupiter did billions of years ago, making it … our most important corner-piece of the planet-formation jigsaw puzzle.

The current properties of 51 Eri b may hold a record of its formation history, and future studies of its atmosphere will hopefully unlock new information about planet formation in general.

The planet is the first exoplanet detected by the Gemini Planet Imager, which was built to discover faint, young planets orbiting bright stars.

To detect planets, NASA’s Kepler space telescope sees their shadow. GPI instead sees their glow, which we refer to as direct imaging, 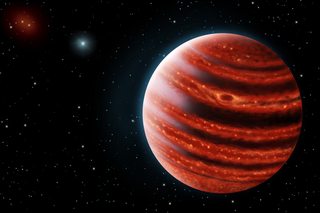 The vast majority of solar systems that have been discovered are very different from our own, with massive planets close to their stars,

Previous search methods couldn’t find systems like our own, with small, rocky worlds close to their star and large, gas giants at large distances like Jupiter and Saturn.

GPI’s highly advanced spectrometer revealed that the planet has the strongest concentration of methane ever detected on a planet outside our Solar System – as well as the presence of water – which indicates that it’s similar to planets in the Solar System and should yield additional clues about how the planet formed.

Many of the exoplanets astronomers have imaged before have atmospheres that look like very cool stars. This one looks like a planet,

The researchers said they plan to begin observing 51 Eri b again in late September, when it emerges from behind the sun, in order to map out the exoplanet’s orbit. “If it’s going in a nice circular orbit like Jupiter, that’d be really exciting,” Macintosh said. “If it’s in a weird orbit, that’s really exciting, too.”

Journal reference: Science.
Featured image: ©2013-2015 xXKonanandPain.
© Content from this site must be hyperlinked when used.