Astronomers have confirmed the existence of an exotic pulsar with the widest orbit ever detected and is one of the very few binary neutron star systems known to date.

This striking finding — follow-up pre-observations of a pulsar discovered in 2012 by a high school students — will shed light on some of double neutron systems’ mysteries like how these systems form and evolve over time.

Pulsars are fast spinning neutron stars — what is left after a massive stars explodes at the end of its life. As a pulsar spins, it starts emitting electromagnetic radiation — up to 1,000 pulses per second — streaming from the poles of a pulsar’s powerful magnetic field. When one of these radio waves reaches Earth, radio telescopes could detect it and provide us with clues of the pulsar.

Pulsars are some of the most extreme objects in the universe.

Said Joe Swiggum author on a paper published in the Astrophysical Journal.

The students’ discovery shows one of these objects in a really unique set of circumstances.

Double neutron star systems are extremly rare, only about 10% of known pulsars are in double systems, the rest of them are found orbiting white dwarfs companion stars. Only a few handful are known to be orbiting other neutron stars or younger stars like our sun.

This particular pulsar, dubbed PSR J1930-1852, was discovered in 2012 by two high school students Cecilia McGough & Paul Laurence Dunbar. They spend weeks poring over data collected by the Green Bank Telescope to identify the unique signature of this pulsar. 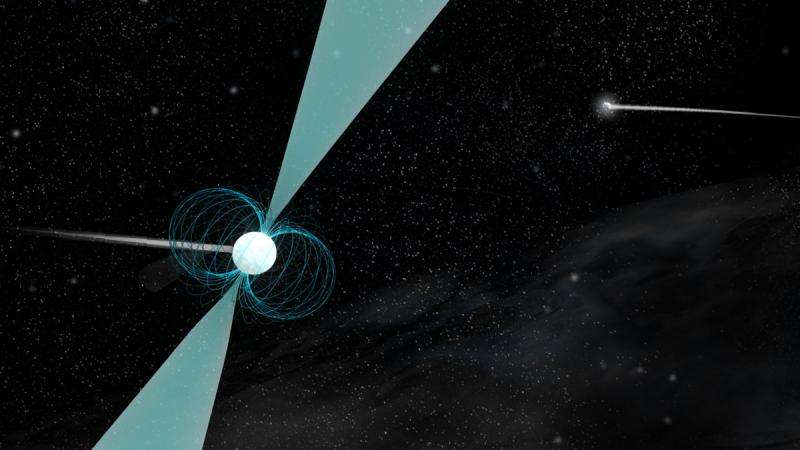 Initially, astronomers determined that the newly-discovered pulsar is part of a binary system, but they could not find it visible companion.

Given the lack of any visible signals and the careful review of the timing of the pulsar, we concluded that the most likely companion was another neutron star.

Some pulsars in double neutron star systems are so close that their entire orbit would fit into an area comparable to the size of the our Sun and they make a full orbit in less than one day.

Its orbit is more than twice as large as that of any previously known double neutron star system.

The pulsar’s parameters give us valuable clues about how a system like this could have formed. Discoveries of outlier systems like J1930-1852 give us a clearer picture of the full range of possibilities in binary evolution.

As we look up into the sky and study the universe, we try to understand what’s out there. This experience has helped me to explore, to imagine, and to dream what could be and what we haven’t seen.