Astronomers recently spotted seven galaxies that appeared around 13.1 billion years ago – 700 million years after the Big Bang. Where the galaxies came from initially confused the experts because they seemed to appear almost out of nowhere, very rapidly. But now the team behind the observations suggest the previously hidden cluster of stars appeared when a cosmic ‘fog’ cleared.

The galaxies have been discovered by a team of astronomers in Japan, led by graduate student Akira Konno and Dr Masami Ouchi, using the Subaru Telescope. The team was searching for low mass galaxies, also known as Lyman-alpha Emitters (LAEs), in the space.

Akira Konno cites, “At first we were very disappointed at this small number, but we realized that this indicates LAEs appeared suddenly about 13 billion years ago. This is an exciting discovery. We can see that the luminosities suddenly brightened during the 700 to 800 million years after the Big Bang. What would cause this?” 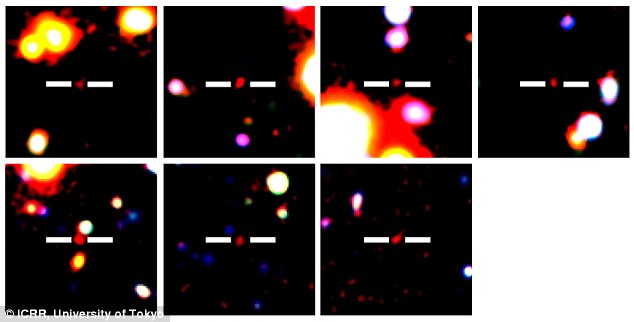 These colour composite images from the Subaru Telescope show the seven galaxies found in the study, as they would have looked 13.1 billion years ago – but their sudden appearance is a bit of a mystery. They have a red colour due to the effects of cosmic expansion on their light ~ MailOnline

According to the team’s analysis, one reason that LAEs appeared very quickly is cosmic reionization. LAEs in the epoch of cosmic reionization became darker than the actual luminosity due to the presence of the neutral hydrogen fog. In the team’s analysis of their observations, they suggest the possibility that the neutral fog filling the universe was cleared about 13.0 billion years ago and LAEs suddenly appeared in sight for the first time.”

“However, there are other possibilities to explain why LAEs appeared suddenly,” said Dr. Ouchi, who is the principal investigator of this program. “One is that clumps of neutral hydrogen around LAEs disappeared. Another is that LAEs became intrinsically bright. The reason of the intrinsic brightening is that the Lyman-alpha emission is not efficiently produced by the ionized clouds in a LAE due to the significant escape of ionizing photons from the galaxy.”