Using the HARPS planet-hunting instrument at ESO‘s La Silla Observatory, scientists have directly detected the visible light from alien planet, for the first time ever.

The astronomers studied light from 51 Pegasi b, explanet which lies about 50 light-years from Earth in the direction of constellation Pegasus. 51 Pegasi b is known as a hot-Jupiter — a class of planets that are similar in size and mass to Jupiter, but orbit much closer to their host stars. The exoplanet was spotted in 1995 when it became the first extrasolar planet ever discovered around a normal star.

Since that discovery, more than 1900 exoplanets in 1200 planetary systems have been confirmed and now, astronomers have taken another look at 51 Pegasi b which provide another advance in exoplanet studies.

The team led by Jorge Martins — University of Porto (Portugal) — has used a new strategy to find 51 Pegasi b which does not depend on finding a planetary transit, and could thus used to study many more exoplanets. This tehnique allows the planetary spectrum to be directly detected in visible light, which means that different characteristics of the planet that are inaccessible to other techniques can be inferred.

The parent star’s spectrum is used as a template to guide the researchers to look for a similar signature of light reflected from the planet as it describes its orbit. It is an extremely difficult task as planets are dim in comparison to their host stars.

This type of detection technique is of great scientific importance, as it allows us to measure the planet’s real mass and orbital inclination, which is essential to more fully understand the system. 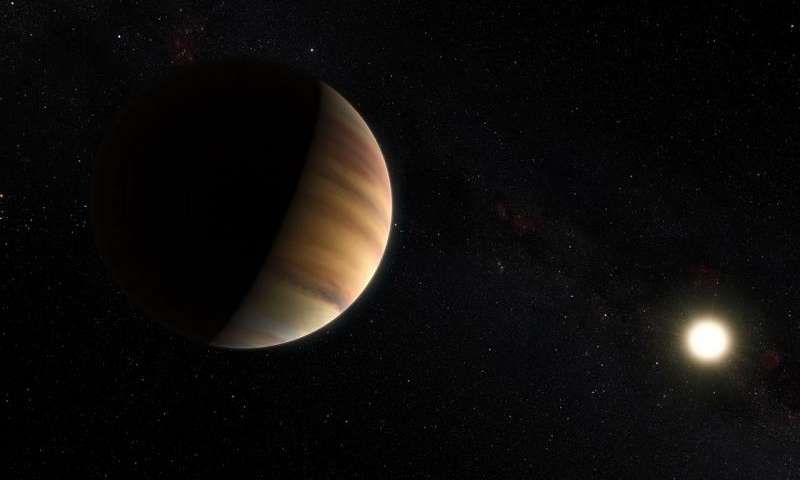 It also allows us to estimate the planet’s reflectivity, or albedo, which can be used to infer the composition of both the planet’s surface and atmosphere.

The main advantage of this method is that we were able to calculate the real mass and orbital inclination [of 51 Pegasi b], allowing a better characterisation of the planetary orbit, something which cannot be done from photometric observations.

51 Pegasi b was found to have a mass about half that of Jupiter’s and an orbit with an inclination of about nine degrees to the direction to the Earth. The planet also seems to be larger than Jupiter in diameter and to be highly reflective. These are typical properties for a hot Jupiter that is very close to its parent star and exposed to intense starlight.

Nuno Santos, of the IA and Universidade do Porto, who is a co-author of the new paper said:

We are now eagerly awaiting first light of the ESPRESSO spectrograph on the VLT so that we can do more detailed studies of this and other planetary systems.