Ancient Lake on Mars was Once A Sustainable Place For life, New Study Found

Even if Mars became cold and dry place long ago, though its still a mysterious world with many intriguing secrets waiting to be unveiled. Recently, a team of scientists have uncovered evidence of an ancient martian lake that likely represents one of the very last places where liquid water existed 3.6 billion years ago.

The scientists examined an 18 sq. mile chloride salt deposit, roughly the size of the city of Boulder, lies in the Meridiani region near the location of NASA’s Opportunity rover. The region is similar to the one in Utah at Bonneville Salt Flats. Such large salt deposits are considered as evidence for a now-evaporated large body of water.

This chloride deposit likely formed from fluvio-lacustrine processes, implying an active hydrologic cycle. Late-stage activity led to valley incision in the surrounding highlands and ponding of water to form a lake in a local basin,

The lake level eventually rose and breached the drainage divide, leading to significant outflow. The remaining water evaporated and eventually precipitated the chlorides at the lowest levels.

But what’s interesting about this formation is its age: digital terrain mapping and mineralogical analysis of the features surrounding the deposit indicate that this one-time lakebed is no older than 3.6 billion years old, well after the time period when Mars is thought to have been warm enough to sustain large amounts of surface water planet-wide.

This was a long-lived lake, and we were able to put a very good time boundary on its maximum age,

We can be pretty certain that this is one of the last instances of a sizeable lake on Mars.

Researchers were able to estimate lake’ salinity due to the depth of the remaining salt deposits, and it was only 8% saltier than the Earth’ oceans, so it would have been a relatively freshwater region where life might’ve thrived.

By salinity alone, it certainly seems as though this lake would have been habitable throughout much of its existence,

However, that other factors such as acidity levels were not included in the scope of the study. 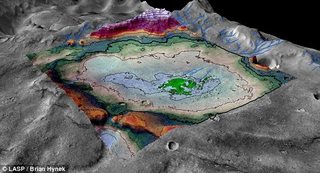 Journal reference: Geology.
Featured image: ©2013-2015 Freak-Angel56.
© Content from this site must be hyperlinked when used.