Ancient ‘Dusty’ Supernova can Give Birth to 7000 Earths

Our universe is pretty big and so are the secrets which it is wrapping around. One such interesting part of our big universe is Milky Way Galaxy. There are so many hidden secrets about it which you would certainly be surprised to hear.

At the center of the Milky Way galaxy, cosmic dust created by an ancient supernova has been observed for the very first time by the astronomers, with the help of a powerful, gigantic telescope. The observation is quite interesting as it suggests that the dust has the ability to form new stars and could help the scientists to figure out why exactly there is so much dust in the galaxy.

The international team of researchers analyzed data obtained by SOFIA – a NASA and German Aerospace Center’s Stratospheric Observatory for Infrared Astronomy project – which took images of a cosmic dust cloud.

“This discovery is a special feather in the cap for SOFIA, demonstrating how observations made within our own Milky Way galaxy can bear directly on our understanding of the evolution of galaxies billions of light years away,” said Pamela Marcum, one of the researchers.

“Dust itself is very important because it’s the stuff that forms stars and plants, like the sun and Earth, respectively, so to know where it comes from is an important question,” said Ryan Lau, lead author of the new study. “Our work strongly reinforces the theory that supernovae are producing the dust seen in galaxies of the early universe.”

Why the galaxy is so dusty is one mystery that has yet to be unlocked by astronomers across the world. The leading theory is that supernovae contain large amounts of metal-enriched material that, in turn, harbors key ingredients of dust, like silicon, iron and carbon. These supernovae then emit this material as a dust that continues to travel throughout the galaxy. Lau said that when a supernova explodes, the materials in its center expand and form dust. This has been observed in several young supernova remnants – such as the famed SN1987A and Cassiopeia A. 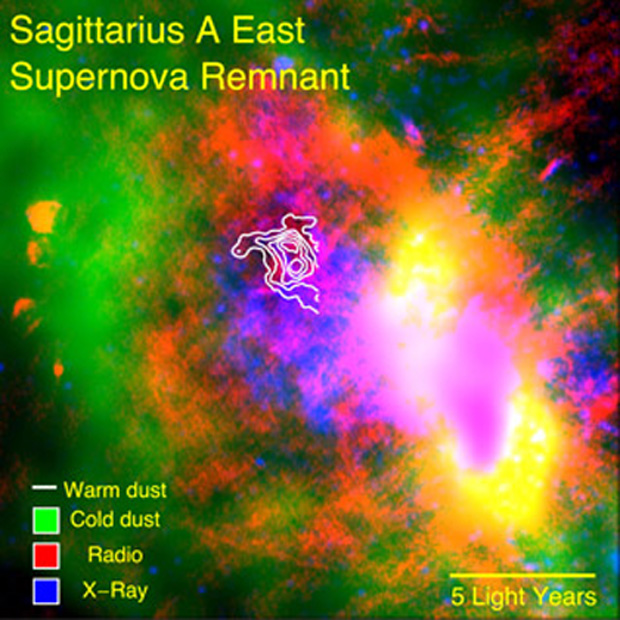 A supernova is a massive stellar explosion that outshines an entire galaxy, radiating the amount of energy that a star would give off over its entire life span, and then fading after weeks or months. The giant blast sends a burst of radiation that expels all of the star’s material into space at about 10 percent of the speed of light in a shock wave.

Supernova have two triggers: a re-ignition of nuclear fusion from a degenerate star, and a gravitational collapse of a massive star’s core. In the first case, a small star may accumulate material from another star, raising its core temperature and creating runaway nuclear fusion. In the second case, a massive star may suddenly collapse, releasing all of its energy in a supernova explosion.

Researchers for this recent study examined Sagittarius A East, which is a 10,000-year-old remnant of a supernova near the center of our galaxy. The particular cloud produced by the supernova explosion contains enough dust to make 7,000 Earths.

In order to observe the supernova much clearly, researchers used the Faint Object Infrared Camera Telescope (FORCAST) aboard the Stratospheric Observatory for Infrared Astronomy (SOFIA).

Until now, there have been no direct observations of any dust surviving the environment of the supernova remnant. This is the reason why observations made by them are so important.

So, the direct observation of this cosmic dust is still a landmark discovery as it gives yet another clue into how our galaxy game together and continues to grow today.