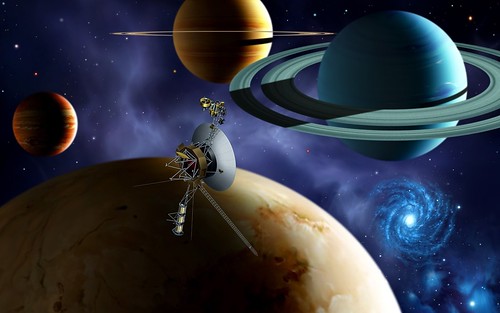 6. The Galileo space probe was intentionally crashed into Jupiter at the end of its operational life to avoid contaminating Jupiter’s moons with bacteria.

7. Helios 1 and 2 are the fastest spacecraft relative to the Sun that humans have ever build. They are travelling at 252000km/h (43 miles/sec) and although they are no longer functional, they are still orbiting around the sun.

8. On August 19, 1960, the Soviets launched Korabl-Sputnik 2 into orbit with 2 dogs, 40 mice, 2 rats, and a variety of plants. One of the dogs later had puppies, one of which was sent to then First-Lady Jackie Kennedy. JFK originally did not want to take the dog, fearing that it may be bugged.

9. The first man made aircraft to successfully land on another planet and send back data was the Soviet Venera 7 in 1970. After landing on Venus, the craft sent back only 23 minutes of weak data, presumably because it landed on its side.