Amazing Image of Dust Devils on Mars Snapped by MRO

The #photooftheday is an image of a dust devil snapped by the HiRISE camera on the Mars Reconnaissance Orbiter. The camera is operated by the University of Arizona Lunar and Planetary Laboratory (LPL).


More…
Exotic Newborn Stars found at Edge of Milky Way
Astronomers Captures Best-Ever 3-D Image of the Universe This image was captured during the northern martian spring in 2012. According to the APOD caption:

tracking across the flat, dust-covered Amazonis Planitia in 2012, the core of this whirling dust devil is about 140 meters in diameter. Lofting dust into the thin martian atmosphere, its plume reaches about 20 kilometers above the surface. Common to this region of Mars, dust devils occur as the surface is heated by the Sun, generating warm, rising air currents that begin to rotate. Tangential wind speeds of up to 110 kilometers per hour are reported for dust devils in other HiRISE images.

You can see the image down: 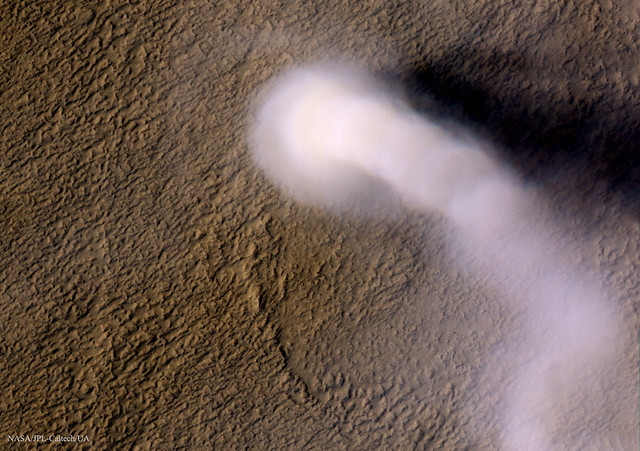