Using NASA’ Hubble Telescope, astronomers have observed the Arches Cluster, the most dense cluster known in the Milky Way with a mass equivalent to more than 10,000 Sun-like stars in a space with a radius equal to the distance between the sun and its nearest neighbor Alpha Centauri star system.

The Arches Cluster is about 25,000 light years away in the constellation of Sagittarius, a relative youngster between two and four million years old, located near the heart of our galaxy — 100 light-years of Milky Way’ supermassive black hole

This monster cluster contains more than 100,000 stars with at least 150 stars within the cluster are among the brightest ever discovered in our galaxy. These stars are so bright and so massive, more massive than our Sun, that it would limits their natural lifespan to a few million years then they will die in breathtaking supernovas explosion.

On Wednesday, this photo became even more famous when President Barack Obama mentioned this cluster in a tweet:

This was a fun briefing: My science advisor just showed me this Hubble shot of the most crowded place in our galaxy.

On Thursday morning, John P. Holdren wrote in the White House briefing why should this photo be shared.

Today’s morning report from NASA contains a Hubble photo I thought worth sharing. The astonishing density of stars — most of which, we now know, have planets — really does make one wonder whether there’s anybody else out there. And this is just one piece of our own galaxy. There are an estimated 100 billion other galaxies in the observable universe. Enjoy! 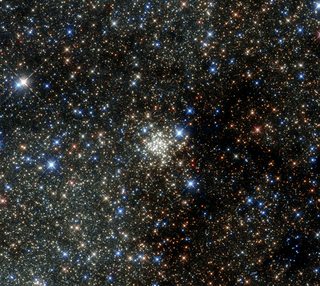 Image of the Arches Cluster. © NASA/ESA. Click to zoom