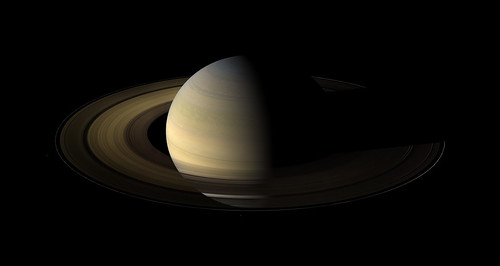 Cassini mosaic of Saturn’s rings on August 12, 2009, a day after equinox (click to zoom)

Saturn is the only planet in our solar system to have moons hiding in another moon’s orbit. Tethys and Dione aren’t alone as they zip around Saturn. About 60 degrees ahead and behind each one is another, much smaller moon, orbiting Saturn in the same path. That’s right—two orbital paths, with three moons in each path.

This effect has nothing to do with Hill spaces. There are stable Lagrangian points 60 degrees ahead of and behind Tethys and Dione. These points are where gravitational pull inward exactly matches the outward centripetal force on the little Trojan moon that’s going way too fast for its weight class.

So what happened to other moons that weren’t in a stable Lagrangian point? They probably escaped or collided with each other, adding material to Saturn’s rings.