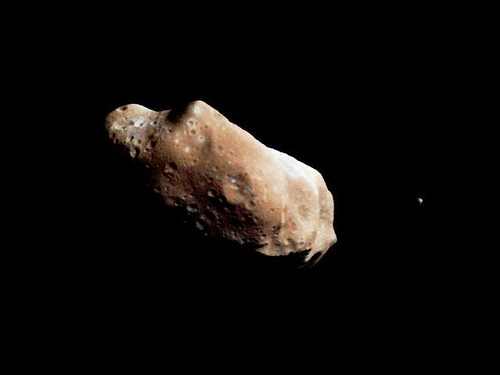 Even asteroids can have moons. This is a photo of Asteroid 243 Ida, with its tiny satellite Dactyl (click to zoom)

At least one asteroid has a moon. It shouldn’t. The Sun is so much bigger, so it should easily steal the asteroid’s moon. However, that asteroid is far enough away from the Sun for something called a “Hill sphere” to take effect.

A Hill sphere is where gravity from an object (let’s call it Earth) is stronger than gravity from a bigger but more distant object (the Sun). Our Moon orbits Earth instead of the Sun because of Earth’s Hill sphere.

Theoretically, any moon that’s far enough away from its planet can have Hill-space moonlets, but none have ever been found. Maybe we just haven’t seen any yet. However, other forces are at work, like tiny variations in gravity called “tidal forces” that make moonlets either crash or break apart. So maybe there simply aren’t any moonlets left anymore.