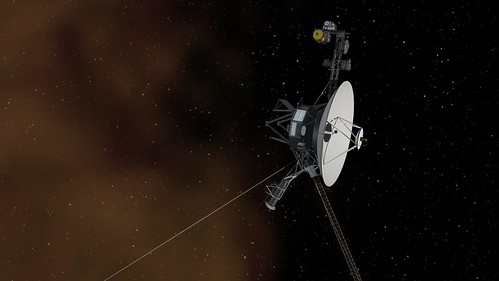 NASA launched Voyager 1 on September 5, 1977, 16 days after the launch of Voyager 2. Why this reversal in order? The Voyager mission was designed to take advantage of a rare configuration of the solar system’s giant planets, Jupiter, Saturn, Uranus and Neptune.

In this arrangement, which occurs roughly once every 175 years, the giants lined up in a way that would allow the probes to harness each planet’s gravitational forces to “swing” from one to the next with minimal self-propulsion.

To accomplish this feat, the probes were launched on different trajectories. Voyager 2′s so-called slow trajectory would enable it to potentially visit all four giant planets, while Voyager 1′s faster trajectory would get it to Jupiter and Saturn before it headed into deep space.

Voyager 1′s course allowed it to overtake Voyager 2 in the Asteroid Belt and gain the lead position in the mission. So, while Voyager 1 launched second, NASA knew all along it would take first place in the race to deep space, and they named it accordingly.