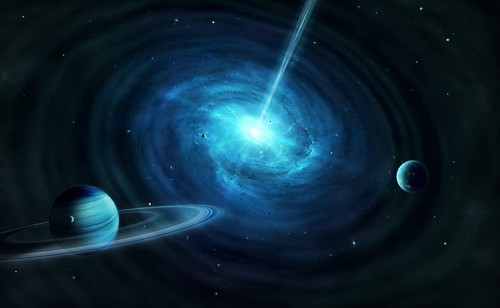 ☻ Quasars have been detected in pairs and triplets (examples are LBQS 1429-008 and QQQ J1519+0627), being part of interacting galaxies which are gravitationally bound to each other.

☻ Microquasars, a type of X-ray binary stars, are the miniature versions of massive quasars, powered by the energy emitted by infalling matter into a compact object like a neutron star or a black hole. The only difference being that the black holes or neutron stars aren’t supermassive but smaller in comparison, comparable in mass to the Sun. The infalling matter in their case, is derived from a companion star, and they display radio jets that are reminiscent of quasars. Some of the prime examples are Cygnus X-1, GRS 1915+105, and SS 433.

☻ Quasars are a prominent type of active galactic nuclei. Depending on the angle of the relativistic jets of an AGN, with respect to our galaxy, we see them with different perspectives. If the jets are perpendicular and pointed away from us, they look like radio galaxies. If the jet is pointed at an angle, with a substantial energy burst directed towards the Milky way, it is seen as a quasar. When the jet is precisely pointed towards us, what we see is a blazar.

☻ When the monster black hole that creates the quasar has consumed all the matter around it, the energy creation engine comes to a halt and emission stops; becoming quiescent. Of course, this engine can start operating again, once enough matter comes in the proximity of the black hole again. This is exactly what has happened with the massive black hole at the center our own Milky Way galaxy. In the future, a collision with Andromeda will trigger it back to life.

According to current cosmological models, the universe is infinite and expanding. To go by the likes of recent discoveries like quasars, it has just begun to unravel its magnificence and splendor and more mind-boggling revelations lay in store, in the future. Blazars and active galactic nuclei remain intense subjects of research all over the world, as superior telescopes like the Chandra X-ray observatory and the Hubble Space Telescope are discovering newer objects at the very edge of the known universe.