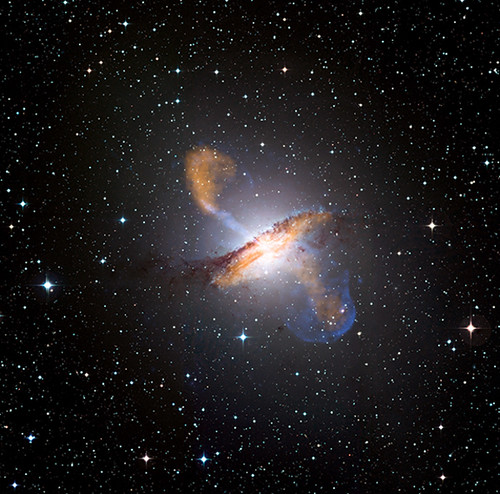 ☻ The exact mechanism that leads to the creation of relativistic jets in a quasar and other active galactic nuclei (AGNs), which may extend for several light years, is still unknown. When the jets are exactly directed towards our planet, the matter contained in them, appears to be traveling at speeds greater than light. The Fermi Gamma-ray Space Telescope (FGST) has been launched to obtain observational evidence that could help understand the particle acceleration mechanics that drives these jets.

☻ The monster black hole in an average quasar will gobble gas and dust worth 10 stars in a single year. The most luminous and powerful ones will gobble up to a 1,000 stars worth of matter in just about a year.

☻ The first quasar, 3C48, was discovered by the American Astronomer Allan Sandage, in 1960, along with Thomas Matthews, using the technique of interferometry. Today, more than 200,000 quasars have been detected. Information about them can be obtained online, from the Sloan Digital Sky Survey.

☻ The very first quasar to be discovered, which was also visible through an amateur telescope in the night sky, is 3C 273, located in the constellation Virgo (RA: 12h 29m 06.7s; Dec: +02° 03′ 09″). With an apparent magnitude of 12.9, it is the brightest visible quasar in the sky. It is located at a distance of 2.443 billion light years, with a redshift of 0.158. It is known to be radio-loud (high emission in the radio wavelengths of the electromagnetic spectrum) and was one of the first X-ray sources to be discovered outside our galaxy. A very compact quasar, whose radiation jet is almost precisely pointed towards the Earth is known as a Blazar. 3C 273 is known to be such a blazar.

☻ Discovered in 2011, ULAS J1120+0641 is a quasar found in the Leo constellation, with the highest known redshift (7.085±0.003), which puts its distance from Earth to be about 29 billion light years. Its luminosity is estimated to be 6.3×1013 times Solar Luminosity (which is equal to 3.846 × 1026 W), with a supermassive black hole powering it, that is estimated to be 2 billion times the Sun’s mass. It will easily outshine an entire galaxy in terms of radiance and energy output.