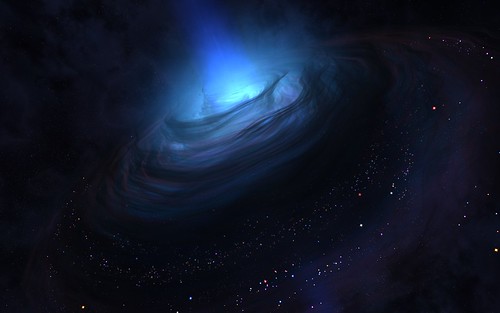 ☻ These powerful energy sources were named as quasi-stellar objects as their electromagnetic radiation pattern in the visible and radio wavelengths, as well as their appearance as points of light in the sky, made them seem like stars initially.

☻ Quasars are objects with a high redshift (their emission spectrum has values of increased wavelengths due to the Doppler effect, shifting them towards the red end of the spectrum), which indicates that these objects are receding very fast, away from us due to the very expansion of the spacetime fabric of our universe. Considering Hubble’s law (an object’s receding speed is directly proportional to its distance from our galaxy), it can be inferred that these are distant objects in the universe, residing billions of light years away.

☻ A consequence of the fact that these objects are radiating energy from billions of light years away, at the far edge of the known universe, is that we are looking at the distant past. The light emitted by them is reaching us, billions of years later, providing us with a time machine of sorts, that looks into the past. This means quasars might be ancient objects, that probably powered galaxies in their infancy.

☻ Through general-relativistic calculations, it has been estimated that the size of a quasar could be up to 10,000 times the Schwarzschild radius of the central supermassive black hole. Schwarzschild radius of a sphere is that length, within which, if the entire mass of the object is stuffed (compressed), its escape velocity would be equal to that of light.

Objects with a radius lesser than their Schwarzschild radius are black holes. Furthermore, through recent calculations, it has been estimated that most quasars will be limited to a size equal to the extent of our own solar system.

☻ In terms of luminosity and energy output, quasi-stellar objects outshine our Milky Way, emitting thousands of times more energy, compared to our parent galaxy. It is primarily due to this high energy output, that they are seen even billions of light years away. The luminosity levels are known to be variable in most of them.