Quasars or quasi-stellar radio sources are enigmatic objects in the far universe whose energy output outclasses several galaxies put together. These high-redshift objects are supposed to be powered by supermassive black holes. Read this article to know more about these mind-boggling active galactic nuclei objects, that have baffled astrophysicists for years.

Is it a star? Is it a galaxy? No, it is a quasar (quasi-stellar radio source). With an energy output that is up to a 1,000 times more than our own Milky Way galaxy (which in itself is home to 200 to 400 billion stars) and an emission spectrum that stretches from infrared, visible, radio to gamma and X-ray sources, quasars have been the most puzzling objects to pin down for astronomers. As light from the farthest reaches of the universe takes millions or billions of years to reach us, we are essentially looking at quasars as they were in the past.

In short, they are objects from the early universe, with the most phenomenal energy output, that is now believed to be powered by matter falling into a supermassive black hole (with a mass that is billions of times our Sun). Collectively, they are now known to be a part of objects known as Active Galactic Nuclei (AGN). 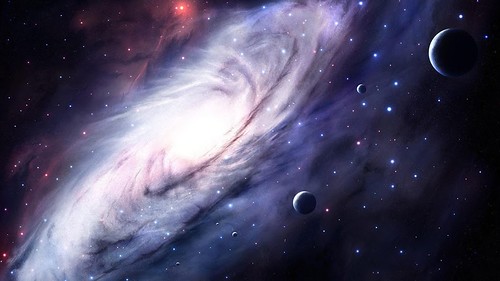 ☻ From their source of energy being the gravitational action of supermassive black holes, to their phenomenal energy output over various electromagnetic wavelengths, every single fact about these objects is mind-boggling to say the least.

☻ Quasars are compact regions at the very center of young galaxies, where gargantuan amounts of gas and dust are sucked in by the powerful gravitational pull of supermassive black holes. According to current models, the infalling trapped matter is accelerated close to the speed of light (forming an accretion disc around the black hole), heating up due to friction in the process and emitting electromagnetic radiation in the infrared, visible, radio, and x-ray wavelengths through twin jets, pointed in opposite directions.