By using Gaia satellite, a team of scientists, with a little help from amateur astronomers, have found an extremely rare star system: a binary system where one star completely eclipses the other, the first of its kind ever discovered.

This cosmic phenomenon is known as cataclysmic variable — a giant white dwarf star cannibalising gas from its more massive companion.

Dubbed Gaia14aae, the system is about 730 light years from Earth in the constellation Draco. It is a type of two-star system: ne of these stars, a tiny white dwarf which is about the size of Earth and the second one, a larger companion star which is about 125 times the volume of our sun. The system was first discovered by ESA’s Gaia satellite back in August of 2014, when the star became 5 times brighter in just one day, noticeable enough to be detected by the satellite.

It’s rare to see a binary system so well-aligned,

Because of this, we can measure the system with great precision in order to figure out what these systems are made of and how they evolved.

It’s a fascinating system – there’s a lot to be learned from it.

By analyzed data from Gaia satellite, the team of astronomers, led by the University of Cambridge, determined that outburst was due to the white dwarf, which is extremely dense — a teaspoon of its material would weigh as much as an elephant — is ‘eating’ its larger companion star.

The gravitational effects from the hot and superdense white dwarf are so strong that it has forced the companion star to swell up like a massive balloon and move towards it,

Additional observations found that the system is a rare eclipsing binary — when one star passes in front of the other, causing an eclipse, from the Earth we could observe it due the orientations of their orbital planes. The two stars are in tight orbit around one another, so a total eclipse occurs roughly every 50 minutes.

This is an awesome first catch for Gaia, but we want it to be the first of many,

We know there are many more out there for us to find. 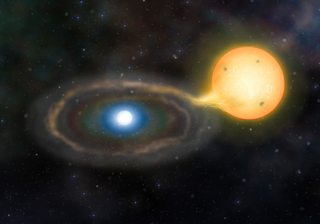 The star system is so amazing and so rare that the scientists says its one in a billion star. Dr. Campbell and his team have also found that Gaia14aae is mostly comprised of helium, rather than hydrogen, which is very unusual because hydrogen is the most common element in the universe.

It’s really cool that the first time that one of these systems was discovered to have one star completely eclipsing the other, that it was amateur astronomers who made the discovery and alerted us,

In the case of Gaia 14aae, astronomers don’t know if the dwarf star will completely devour its companion first or whether the two stars will collide and cause a supernova explosion.

Every now and then, these sorts of binary systems may explode as supernovae, so studying Gaia14aae helps us understand the brightest explosions in the universe,

The system could be an important ‘laboratory’ tool for the study of ultra-bright supernova explosions, which are vital to measure the universe’s expansion. The details of the new research are published in the journal Monthly Notices of the Royal Astronomical Society.