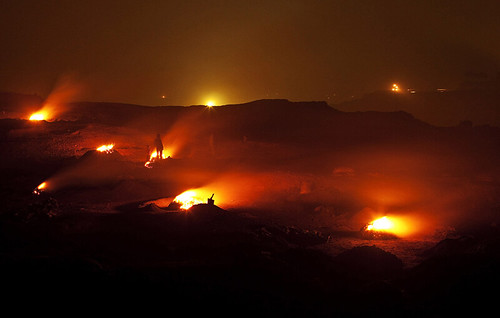 Jharia, India is home to one of the largest coal mine fires in the world. At least 70 different coal mine fires now burn as one, dumping thousands of tons of carbon dioxide into the atmosphere each year.

India is the fourth leading generator of greenhouse gas emissions in the world, and the burning coal mines are a major source of this pollution.

Coal mining in Jharia has been going on since the late 1800s, and the first reported fire goes back to the 1920s.

However, the problem really began in the 1970s when the coal mining companies switched from below-ground to above-ground practices, which leaves the coal exposed to oxygen when not properly closed—meaning it can easily be ignited.

Soft coal can even spontaneously combust at temperatures as low as 40 Celsius (104 F). Once started, the coal fires are almost impossible to put out (and since there is no economic incentive for the mining companies to bother, little effort is made).

As they advance, the fires erode the ground, which has led to entire houses and even railroads being swallowed: In 1995, a riverbank was compromised by an underground fire that caused the wall to collapse, flooded the mine, and killed 78 workers.